The next eight pages of the Mentzer Basic Players Manual are the actual solo adventure.  It's arranged into lots of short numbered sections, with choices at the end of each about what you'd like to do, and which section to read next for the results of that choice. 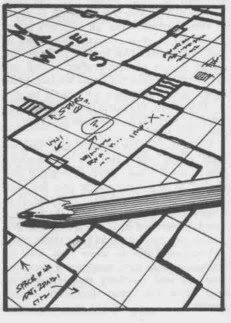 The same nameless Fighter from the tutorial is your character, and you're returning to the caves near town to explore them further, only without any help.  It's a lot more deadly than before, with a good chance that your Fighter will die in any of the combat encounters with the exception of the rust monster, which may set you back all your earnings if you let it turn your weapons and armor to rust. 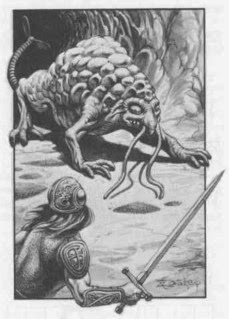 Back in the mid-80's, I remember playing through this thing multiple times until I'd finally gotten it all explored and came out with a "win."  Of course, it's possible to cheat - especially with the riddle room.  Metagaming can arise even in this aid to play.  If you don't know what I'm talking about, well, there's a riddle that will double all of your treasure if you answer it correctly, and well, there's nothing but the honor system to prevent you from not abusing it if you already know the answer but die and start again - hit the riddle room last.

There are a few things I take away from this now that I didn't think about 30 years ago, but notice that I did pick up on subtly. 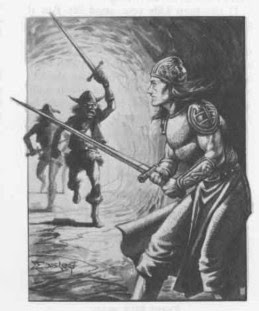 Anyway, we're through the tutorial/learning to play section (well, there's a lot more learning to play advice scattered throughout the rest of the book, but from here on it it's actual game rules and stuff).

Are the first 22 pages of this 64 page rulebook well spent?  All in all, I'd say yes.  It sure worked for me when I was 11 years old with no one to teach me.  And the remaining 42 pages have plenty of room for the "meat" of the game from a player's perspective, not to mention the 64 page Dungeon Master's Book.  This last section did lead to my friends and I playing it a bit too hack and slash in the earliest years, but we soon got over that, although we never did shy away from a good combat!

Posted by Dennis Laffey at 5:35 PM