Pages 2 through 8 of the Mentzer Players Book contain the tutorial "adventure" that walks the nameless Fighter through some caves to encounter a few monsters, Aleena the Cleric, and the evil Bargle the Magic-User.

It gets slagged on a lot these days.  It's written for idiots!  It's a baby version of the game!  Blah blah blah.

Let me tell you something.  I'd read some Choose Your Own Adventure type books, some fantasy stuff like Lloyd Alexander's Prydain Chronicles, and of course watched plenty of Saturday morning Cartoons, including the D&D Cartoon before I got this set.  But even then, I still had no idea how to actually play the game.  And this section taught me, in an interesting way, quite a few tropes of D&D play that I wouldn't have gotten otherwise.

It teaches you how to make attack rolls and saving throws.  It explains the six ability scores.  It lets you know what the different classes are, what they are good at and why it's good to have a variety of classes in a party.  It teaches you a bit about a few monsters, and some basic dungeoneering advice, like lighting, listening at doors, what are the good treasures, etc.  And it'll break your heart when Bargle slaughters Aleena with his magic missile.

Yeah, looking at it today, as experienced gamers, it looks like 7 wasted pages in the book.  But it served its purpose well with me back in the day.  I didn't have anyone to teach me the game, I just had these books.  And despite making quite a few mistakes early on (which didn't really matter, we were having fun and it was the spirit of the rules more than the RAW that matters anyway), I got it and was able to teach my friends from this. 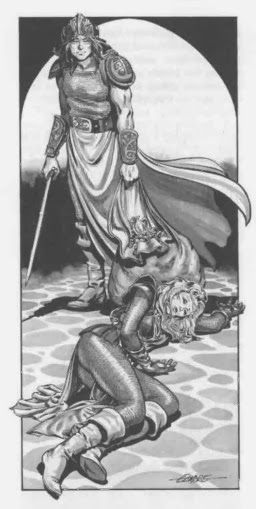 Now, more recent RPGs, like the Lamentations of the Flame Princess game, came with the learning to play tutorial in a separate booklet.  Actually, back in the day Star Frontiers also had a "basic play" 16 page booklet along with the 64 page main booklet.  It's a good idea.  But since they already had two booklets going in, I guess it made sense to have this in the Players' Book rather than have it and the CYOA-style adventure that comes next in a small booklet, the players' info in another small booklet, and the DM stuff in a bigger book.

Anyway, last word on this section is about the final section of the tutorial, "Winning."  Of course it tells you that there are no "win" conditions in an RPG, and that if you have fun, that's considered winning.  Even if you die.  You can always just roll up another character.  Still good advice, 30 years later.