Late updating the Chronicles of Ur.  It's been over a week since the game.

This session, Justin is of course the DM.  Jeremy played Noctis (formerly Burg) the Orc.  Dean played the Ghost of Very Elder Karl.  Rick (who DMs the Pathfinder Dragon's Delve game) played Udumbara the pacifist Cleric.  I was of course Thidrek the Sleestak.

We were camped out near the subterranean river with the corpses of Karl and Ralex the Fighter.  Our other companions had slipped back across the Veil to their home universes.  We found a skiff coming down the river, containing Udumbara, the only survivor of an expedition.  We made friends with her, and used her boat to head downstream.

We discovered some unusual statuary in the river, quite old.  There was a fork in the tunnels, and we were forced to quickly choose one or the other. Reminded me of Dragon's Lair.  We went left. 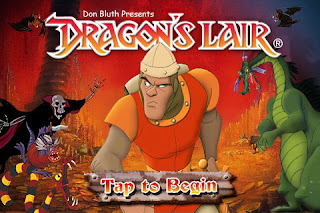 After a little while, we heard a loud rumbling - assumed it to be a waterfall ahead - and found a place to dock.  While resting, the ghost of Karl did some scouting, but couldn't go too far from his corpse.  We got scouted while resting.  We explored up a staircase a bit, and found some ner-do-well types.  After a bit of negotiation, trying to get safe passage to the surface, we were introduced (re-introduced in Noctis's case) to their leader Bolt, the leather-bondage gear clad smuggler we'd ran into shortly after the bees killed Karl.  His short, cloaked magically adept friend was nowhere to be seen (Karl seemed to sense another presence in the room).
We made a deal with Bolt.  He wants us to invade the Sky Hunters' temple and steal a key to the black pool portal system like the one we had that got us into the current mess we're in.  He promised us safe passage back to Fort Low if we open up the portal system and give him the key.

Thidrek is planning to double cross Bolt.  Some of his men have Spiked Circle emblems, and they've been one of our biggest enemies in Ur.  But we'll see how things play out next session.

Posted by Dennis Laffey at 8:08 AM