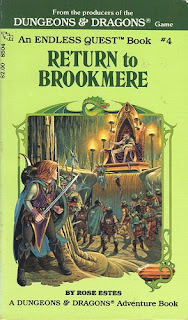 "You are Brion, an elven fighter on a scouting mission for your father, the king.  Can you destroy the monsters that invaded Brookmere, your family castle?" --from the back cover

Return to Brookmere is by Rose Estes, like all the earliest EQ books.  It's quite a good one, not just in my opinion, but among many who read the EQ series as kids.  It's not a perfect book, but it is an entertaining read.

As the back cover blurb says, you've got to enter your family's castle, destroyed by monsters when you were an infant, and try to learn the strength of the monsters, and whether any of the treasures still exist.  You're sent along with some other elf warriors, who quickly die, leaving you alone with only your talking amulet Mimulus (or Mim) to aid you.

Brookmere has been overrun by a mixed horde of humanoid monsters: kobolds, goblins, orcs, hobgoblins, gnolls, and a few bugbears and hill giants.  Their leader is a wererat named Frang.  All is not well for the monsters, though, as something has been attacking them from inside the ruins.

The story is an excellent setup for the adventure, and the book is well designed as a game book.  You start out quickly (the first choice, with three options, is on page 8, including page 1 as standard intro, 1 full page illustration, and three half-pages of text to get to it, and page 8 is only those choices).  You've got several paths to take at the beginning, although most paths where you survive you end up going to the same two or three 'story' sections--the gnoll meeting, the wererat meeting, and the encounter with the mysterious 'attacker within.'  Early on, if you take the right path, there's also an interesting encounter with a rather bizarre invisible stalker (who isn't invisible at the moment) and the illusionist who held off the invasion long enough for the elves to escape.

There are also a lot of fun little encounters with monsters, such as a gnoll who just wants to collect pretty things instead of ripping elves limb from limb, a kobold with a cold, some bowling hill giants, and an under appreciated orc guard.  Throw in a gelatinous cube, some green slime, and a few traps, and you've got a pretty decent little dungeon crawl book.

The only big fault I find with the book now is the lack of a clear 'best' ending.  Granted, your mission is not to destroy the monsters of Brookmere, merely to scout them out, but the best endings you can get are 'escape and bring the information home so dad can send in the army.'  A smaller fault is that it's rather inconsistent on what you can and can't do.  There are times when one kobold makes you pause to wonder if you can take it on in combat, another section where you dispatch six kobolds without even much description of how you do it.  And that's not even necessarily looking at the story from a D&D perspective.  A final small fault is that because most of the early branches converge on the exposition scenes if you don't die or run away, you sometimes miss out on some important details.  Case in point, Mim can cast sleep, but this is only revealed in one branch, but there are several ways to get to the encounter where he can use it.  These faults don't detract from the fun of the story, though.

The cover of Return to Brookmere is of course by Elmore, and it's decent.  The interior illustrations by Timothy Truman, however, are really good.  Although a few times it looks like the art director got his/her monsters mixed up (the effeminate gnoll I mentioned above gets a pic, but looks more like an orc, for example), Brion looks like a real badass, and the monsters are well depicted.

Overall, this is an entertaining book, with lots of good game play.  There are also plenty of interesting ideas you could snag for your RPGs, and quite a few areas where monsters are defeated by cunning rather than just by the sword.

Finally, I'd like to thank Jaquelyn Michelle Gatt, whose imprint is on the first page.  She kept this book in much better condition than any of my old EQ books that were worth reading (the sucky ones are in really good condition).

Protagonist: an elven fighter who can usually handle himself well in a fight
Sidekick: a talking amulet, who annoys the protagonist more than it annoyed me
Adventure: well done, with lots of interesting encounters and paths
Endings: a fair variety, but a little disappointing in not having a clear 'win' ending
Art: Nice Elmore cover, excellent interiors by Truman
Overall: Excellent

Posted by Dennis Laffey at 6:48 AM