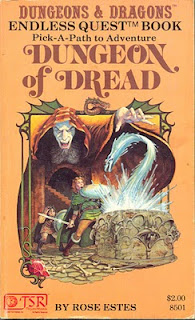 "You are Caric!  A brave knight in a world where dragons roam!"  So says the back cover of what would become Endless Quest book #1.

Interestingly, before I get to the review, I've got a 1982 2nd printing, and the ad in the back for the EQ series lists this one third.  Pillars of Pentagarn is first, then Mountain of Mirrors, DoD, and finally Return to Brookmere.

As the "first" book in the series, I have to say that this book gets the series off to a good start.  Written by Rose Estes, one of the more prolific EQ authors, our hero Caric is a seasoned adventurer and a fairly clever one too.  He is of course joined by the cowardly Halfling Laurus, who serves as the annoying sidekick there to teach kids a lesson about bravery (maybe that guy in the X-Files read this book?).

The annoying sidekick does get better in some paths within the book, though, as Caric teaches Laurus how to be an adventurer.  Laurus stops whining and starts kicking some ass later in the book.  So all in all, that's not a huge hindrance in the story.  There are worse offenders in later books.

I think that DoD shines as an example of clever ways to outwit opponents without having to go toe to toe.  Our hero Caric enters the dungeon armed only with a sword, dagger (which he gives to Laurus), and a shield.  No armor, no equipment.  Well, he was just passing through and wasn't planning on raiding a dungeon.  So, as a seasoned D&D player might expect, quite often if you choose to go into battle in this book, you die.  Most of the time if you defeat a monster, it's done by wits.

Of course, part of this is because these are a series of books for children.  They don't get too graphic in any of the violence they do show.  But it IS based on D&D, so of course fighting monsters is a big part of the book.

Another plus to DoD is that it showcases a LOT of monsters.  Gargoyle, a bugbear, lots of giant insects, a dragon, a minotaur, a basilisk, and of course the water weird.  There are also lots of encounters showing what a bastard Kalman the evil wizard is.

Of course, the dungeon itself is fairly unmappable.  I tried it once as a kid, and there were so many crisscrossing lines the map was hard to read.  Part of this is because the book is really divided into two parts (simulating two dungeon levels, but as a kid I tried mapping it as one).  In the first section, all roads lead to death or the water weird room (with maybe one or two exits from the mountain).  In the second part, you get death, an early exit, or else make it to the big showdown with Kalman, which is fairly well written and exciting.

The final thing I really like about DoD is that, as I just mentioned above, there are some endings that aren't victories but mere survivals.  Caric and Laurus exit the mountain, often with some small bit of treasure, and a desire to use that wealth to fund a real expedition to clean out the mountain.

Overall, while the writing is for kids, and Laurus can be annoying as a sidekick (plus Ms. Estes seemed to be unsure whether he was a Classic D&D Halfling class, or an AD&D Halfling Thief but that's beside the point), the encounters are varied and the solutions to them are clever more often than violent.  As an intro to the series, and as a tool for teaching kids about clever dungeoneering, this book succeeds.

Posted by Dennis Laffey at 6:32 AM