16 Which RPG besides D&D has the best magic system? Give details.

First off, I really do like the Vancian system. It works well. It's simple. It gives the player options and choices that they need to make.

Also, as I've said before, I haven't played any fantasy games that aren't D&D derived. So I don't have a lot of experience with other magic systems, except in passing (or in video games). Lots of CRPGs use a spell point system well, and games like Retro Phaze look like they should work well at translating that to the table top. 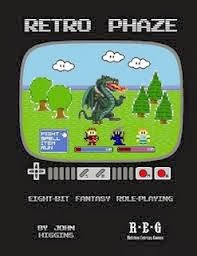 This game (free, get it here!) emulates 8-bit CRPGs like the early Final Fantasy/Dragon Warrior/Ultima games.  It has a list of spells that you learn as you go up in level, and you also gain spell points each level.  Pay the cost to cast any spell you know, just like in the console games.  Yet another game I'd love to try out some day.

Also, in Chanbara I'm developing a non-Vancian system that I hope works out well. I don't want to say it's “best” yet, as it really needs to be put through the paces.

Posted by Dennis Laffey at 8:37 AM