26 What RPG based on an IP did you enjoy most? Give details.

Hmm, probably d20 Conan or d6 Star Wars. Assuming we're talking about RPGs based on IP BEFORE they were RPGs. Marvel Supers is fun, too. I guess if I had to pick, it would be the Conan game, but it's also pretty much D&D with no magic, and this is the Non-D&D blog challenge, so...

What RPG based on an IP have I never played but would like to try? That's a better question for me.

For a few years, I got the “Mail Order Hobby Shop”, TSR's mail order catalog (at least I assume it came from TSR's brick-and-mortar storefront, since it was from Lake Geneva and D&D and other TSR games were heavily featured). My brother and I would go through it, Killing Machine and my cousin Ben as well, from time to time, and we'd make wish-lists that for the most part never got fulfilled.

Listed in there was an Aliens RPG, based of course on the movie. Space marines versus xenomorphs sounded to us like a great way to spend some RPG time. Since we never had the actual licensed game, we made due with Star Frontiers. Our intrepid space explorers had several instances where we met up with a company of colonial marines (with the same names as the movie characters, even if they'd died the time before...which, just like in the movie, they usually did – although usually not in the same manner as they died in the movie) and trounce a nest of Giger xenomorphs.

Later, in my d20 days with the Ebisu group, as I mentioned, I used Michael Tresca's free PDF resources for Aliens, Predator and Terminator along with d20 Modern and Future to run an Aliens/Predator game. I've mentioned that before. 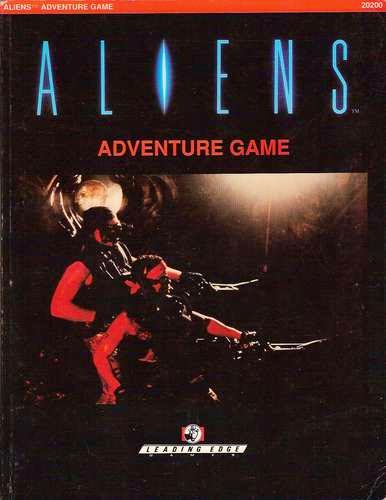 Despite all that, I'm still curious if the original licensed Aliens RPG was any good. Some day, maybe I'll get my hands on a copy, either digitally or in print, and find out.

Posted by Dennis Laffey at 8:04 AM