You know, I've got no idea who is behind the waste of electrons that is Your Dungeon Is Suck, but this is more or less how I imagine whoever is behind it...as a stereotypical Japanese Otaku.

Now, you've probably heard the word, and know it as "Japanese for geek" but in its original form, it's really much more pathetic than that.  It literally means 'house' as in someone who's so socially unskilled that they never leave their home to interact with others.  It's lost some of that bite over the years, but 17-18 years ago when I first learned the term, I was warned by all of my Japanese friends NOT to call myself that simply because I'm a nerd who's into RPGs, video games, and comics (oh, and Japan/Japanese).  Back then, it was truly an insult to be called 'otaku.'

In Japan, the depiction of these guys as a stock character in the media are the ones who are in their thirties or forties, spend all day in a small cramped room in their parents house, watching anime porn, sniffing high school girl panties (which they likely bought online because they can't get up the nerve to actually approach the high school girls who park themselves in front of convenience stores with their skirts rolled up and their knees wide apart advertising that they're willing to sell so they can buy a new Prada handbag or whatever), and when they finally take a break from the porn, it's to switch to the feed of the camera they've secretly installed in the local high school girls' changing room so they can wank off to grainy images of half naked girls.  Because that's about as close as they're ever gonna get to a real one, and that makes them bitter and angry.  Obviously, this is a stereotype created from an amalgam of traits common among otaku, not the image of the group as a whole, similar to the Simpson's Comic Book Guy.  Japan is a country that's very friendly toward people with 'nerdy' hobbies, and if, as faustusnotes claims, his friends are self-identifying as otaku, the image has definitely changed over the years. 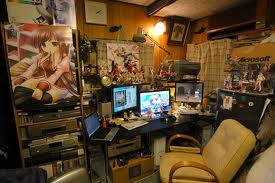 Now, whoever is behind YDIS is likely not this pathetic, but the pure nerd rage that pours out of it every time read it (which is very rarely) over the most trivial of topics always makes me think of that stereotypical stock character in Japan.

Anyway, Christian, if you happen to be reading this, hope you come back soon, dude.  YDIS, if you're reading this, fire away.  I'll be oblivious to your infantile ranting.