Ruins of the Ancients

Considering my idea to run a Gamma World game set in the far future of the Marvel Comics universe.  Most of the potential players in any campaign I would run tend to read my blog, so I figure that cat's out of the bag and I might as well go full bore with this idea whenever I get around to running a game again (and I am in serious gamer withdrawal right now, but no relief in sight). 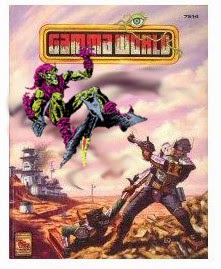 Now, if the players know that this is the future of Marvel Earth, here are a few of the things I think I'll need to do to pull off a game like this:

Finally, I think I mentioned this previously, but for awarding experience points, I plan to create exploration based awards similar to the system developed by Jeff Rients.  There will also be XP for recovering artifacts and information; also returning "junk" for the tribe (XP for treasure).  I plan NOT to give out XP for combat.  So the game will focus on exploring the wilderness to locate ruins, exploring those ruins, and bringing stuff back home.  Fighting mutants, creatures, robots and aliens may be necessary, but the rewards of combat will be access to the things that provide XP (and surviving, if you're lucky).

I may make an exception to the "no combat XP" rule if the players get involved with the machinations of the Wizards, and decide to take one (or all) down.