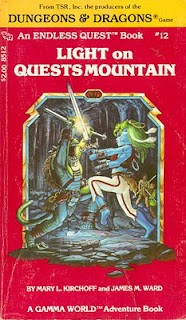 "On an earth made hostile by nuclear war, you and your tribe live a primitive, danger-filled existence.  Now you must prove your readiness for adulthood by undertaking a perilous quest."  --from the back cover.

Light on Quests Mountain, by Mary L. Kirchoff and James M. Ward, is another solid entry in the Endless Quest series.  It's one of two (to my knowledge) books set in the Gamma World game setting.  In it, you are Ren, a young pure strain human, and you have two companions, the lizard boy Sars and the monkey boy Chark.  The three of you graduate school, are given metal spears (a real treasure to your barely above the Stone Age tribe), and sent on a journey to Quests Mountain to prove you are ready to be considered adults.

In addition, there have been mysterious lights seen on the mountain top lately.  The village elders want you to investigate them if you can.  And personally, you're wondering what happened to your older brother who went on his quest a few years ago and never came back.  For your sidekicks, scholarly Sars wears glasses because he's nearsighted, and he's afraid of the dark.  Reckless Chark is afraid of nothing--except water.  He can't swim, and hates to get wet.

The book is divided into three main sections.  When you set off on the quest, you can go through the Green Lands or the Sand Lands.  If you survive your path, you'll make it to Quests Mountain and have a chance to succeed on your quest to learn the source of the lights.  This allows for a lot of Gamma World craziness to be thrown into the book, but for the most part it doesn't get silly.

Having Jim Ward as a co-author was a good idea on this book.  The book really captures the feel of Gamma World.  In fact, when I finally bought a copy myself, the 4th edition book from the early 90's, I was surprised that the default starting tech level was Renaissance firearms, tricorn hats, and the like.  I like the default of the book, and earlier editions of Gamma World, that your society is still primitive, and you need to really fight to survive.

Now, as to the major failings of the EQ series, this one skirts them nicely.  Your character and companions are young and untested, but competent explorers, good in battle, and know enough about the world you live in.  Sars and Chark bicker similar to that of Fox and Owl in Pillars of Pentagarn, but because they actually contribute to the adventure, it's not so annoying.

Finally, the artwork of the book is great.  The cover is by Keith Parkinson, and the interior art is by Steve McAfee.  It think McAfee does a great job of conveying the claustrophobic feeling of caves, the wildness of the Green Lands, the stark emptiness of the Sand Lands, and the general oddball and mysterious feel of the post-holocaust earth.

Overall, you've got a good book which showcases the game it comes from well, provides an exciting adventure into the unknown, and avoids the flaws that many of these books fall into.  It has good, meaningful decisions, doesn't have moralizing and annoying sidekicks, and presents a competent if unseasoned team of adventurers.

Protagonist:  Young, inexperienced, but with great potential.
Sidekicks:  A pair of mutant animals who are also competent adventurers rather than just annoying burdens on your adventure.
Adventure:  A trip into the unknown, with lots of variety and interesting situations.
Artwork:  Excellent, really brings the setting and the characters to life.  Cover by Parkinson, interiors by McAfee.
Endings:  One best ending, several good endings, and a variety of bad endings.
Overall: Excellent