I've been going through TSR modules again, looking for dungeons to stick in my West Marches.

Partly, I'm lazy. I do make my own dungeons, usually small ones. But having a few larger dungeons here and there is nice, too. Places they can't clear out in a single session. Since I use a variation of Jeff Rients' table of nearly certain doom to make sure each session ends with the players in a safe haven, it becomes a choice for the players whether to return to a location and further explore it, or not. The Caves of Chaos have been pretty popular. Quasqueton so-so. Xak Tsaroth not so much. One player really wants to go back to Castle Ravenloft, but keeps getting voted down.

Partly, it's that I grew up playing D&D, and hearing about these famous modules. TSR advertised them in the backs of rule books, in the Endless Quest books (and some EQ books were based on famous modules), and in the Mail Order Hobby Shop catalog that I would occasionally send away for but never once placed an order from. I heard other players talk about them. I read the descriptions in the catalog or other TSR products. But I never got to play in any other than Isle of Dread (which came with the Expert Set). I had a few of the less well known modules (Drums on Fire Mountain, Test of the Warlords, The Endless Stair, Into the Maelstrom). One of my cousins had Against the Giants but we never played it.
And since I have a ton of old TSR modules in PDF form, I thought it would be fun to play through them with my players, if in slightly (or sometimes heavily) modified form.

Anyway, going through Lost Caverns of Tsojcanth the other day, I got to thinking about the Monster Record Sheets that some modules have. The one page with a listing of all the monsters and their basic stats. Like this: 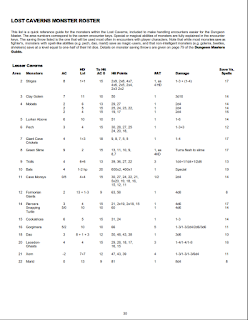 I think Endless Stair was the first module where I encountered this. But since monster stats were also listed in the encounter area descriptions, I don't remember referring to it that much when we ran the module. I did run a one-shot game many years ago (I was still living in Japan) where I made up something like this for my monsters in that dungeon. It was pretty handy.

And now, in my West Marches game notes, each area or zone has its own random encounter list. And I put the important stats on the wandering monster tables similar to this. It's pretty handy. Unless the monster has lots of spells or weird abilities, I can usually run encounters just with that. And that's pretty handy. Especially since when I first started up the campaign (using 5E) I would just note the page number in the 5E MM and then look it up. So I'd be juggling my maps, encounter notes, and the MM which was not so handy.

Posted by Dennis Laffey at 8:58 PM