Current State of the West Marches 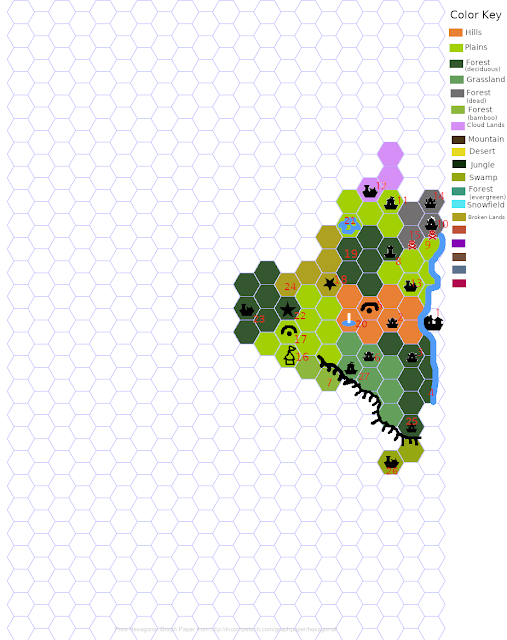 
Here's the current map from my West Marches game...well, the player map anyway. These are all the hexes they've been to. Most have been explored. Early on, I used a random die roll to determine if they found the interesting thing in a hex (if there was one, some hexes have no adventure potential except possible random encounters). Later, I decided that it was better for the game to ignore realism and have them encounter the hex contents if they entered the hex. So there are still a few hexes that were crossed early in the game that haven't been fully explored, but I think there aren't many of them left.

The thing that's interesting for me is that since last December, no new hexes have been explored.

Part of that is due to the shift from 5E to Classic. As I've blogged about a few times before, I lost some players and gained some new ones. And the new players started out with 1st level characters. So they wisely wanted to stay close to town. And they did find some of the locations that were undiscovered earlier.

The second reason is that there are a few dungeons that have been discovered, and they've been enjoying tackling these dungeons. Early on it was a home-brew dungeon of mine. Lately it's been the Caves of Chaos.

I think, unless they throw me a curve ball, tomorrow they intend to try and find the new boss of the Caves. If they manage that, I expect they'll move on to other areas. So I threw out some new rumors that, if they follow them up, will take them just a few hexes beyond the current limits in one direction or another.

And I shouldn't be complaining about them not covering lots of new hexes each session. It gives me more time to key encounters for new regions on the map that haven't been explored yet.

Posted by Dennis Laffey at 9:17 PM