I've been thinking a bit about Flying Swordsmen.  You know, that free OSR game I made, a retro-clone of a little known freebie from WotC just prior to 3E launching named Dragon Fist, all about wuxia fantasy Chinese martial arts magical action? 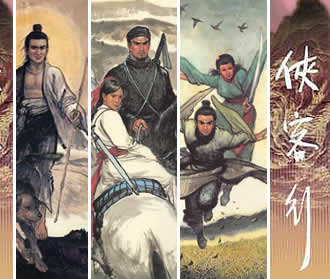 Yeah, that one.  Probably you downloaded it.  Maybe you even read some (or all?) of it, and thought it seemed pretty cool.

But did you play it?  Probably not.

Did you make a Flying Swordsmen PC and run it through a FLAILSNAILS game?  Never heard of anyone doing that, and I was pretty much too busy with grad school stuff and our local games to do it myself (although I wanted to).

Did you at least throw one or two of the monsters into your megadungeon just to mess with the expectations of your players who are jaded from years and years of the same old Monster Manual listings (which they know by heart because hey, they're often DMs too)?  Why the hell not?

Anyway, the point of this post isn't me trying to guilt trip you into trying to actually play my game.  There are lots of pdfs of games and supplements and adventures that I've downloaded, maybe looked at and thought it was neat, and there it sits on my hard drive collecting virtual dust.  It's actually sort of the opposite.

I've tried to run it several times, and while in theory it should be a lot of fun, something about the game just doesn't work the way it's intended.

Flying Swordsmen is about emulating all of the awesome wire work/CGI stunts you see in Hong Kong martial arts fantasy action movies.  Dancing over the helmets of a troop of warriors.  Fighting across a crowded inn while balancing a tray of dim sum on your head.  Standing on a swaying bamboo branch and fencing with a master who outclasses you.

The problem wasn't that the system didn't support the desired actions.  Flying Swordsmen, and Dragon Fist before it, both do.  The problem is that neither game rewards such play.

If a player is fighting a villain, they can make a risk-reward analysis each round of combat.  Should they attempt something flashy just because it's cool?  Or should they just make an attack to whittle down the villain's hit points?  In my experience running the game, they choose the latter.  And why not?  The only thing going for the first one reward-wise is bragging rights. 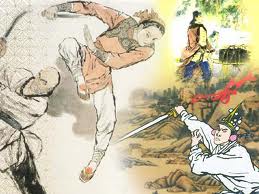 Flying Swordsmen needs to reward players for having their characters attempt crazy wuxia stunts.  Something simple, like a 5xp times your level for attempting and failing a stunt, and 10xp times your level for achieving your desired result.  When I finally get around to revising FS, this is going in the rules.  If I ever get a chance to run the game before it's revised, I'll use this.

Posted by Dennis Laffey at 3:21 PM