Do I have time to spend on a big long blogging project?  Not really, but if I keep it simple and my sections brief, I can try to get a post up every week or so without disrupting my academic readings and related writing.  Or at least I hope so.  We'll see.

My 40th birthday is coming up in about a month, so it was 29 years ago that I first received my Mentzer red box Basic D&D set for my 11th birthday.  Yeah, I'm one of the pup kids in the mid-80's who taught himself how to play with the "kiddie version" of the rules rather than the original set or AD&D.  And I'm still basically playing those rules today (liberally stealing what I like from other editions and games).  So, I'm going to go through those old booklets again, reading cover to cover and seeing how they look to my old eyes, and reminisce about how I first felt about them, or at least as much as I can recall. 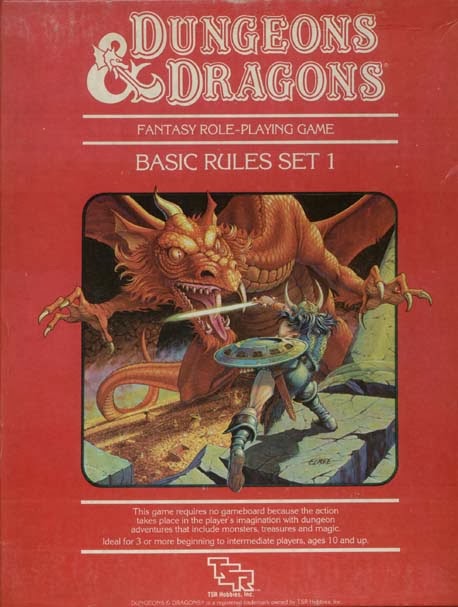 Mentzer Basic: Cover to Cover
Front Matter: Preface, How to Use this Book, Acknowledgments, Dedication, Table of Contents

Preface
The preface is of course by Frank Mentzer.  Aside from the overuse of the exclamation mark (he was writing for kids like me, after all), this easy to overlook text does a good job of laying out the basics of the game.  I've seen people struggle (myself included) to explain just exactly what an RPG is, yet Frank does it succinctly and well here.  He starts with a bit of image invoking in-character text, mentions books and movies and how they're nice but wouldn't it be nice if it were your story?  Then he goes on to give the basics of D&D - there are no end conditions like in other games, it's cooperative, and all you really need are the rules in your hands, a few friends, and some time.

Note to self, use this text with newbies in the future instead of yet another of my long, rambling attempts to explain the game.

Frank ends the preface with yet more evocative text, and I do remember reading that as a kid, and being drawn in by it.  Hell yeah, I wanted to be that strong, golden-haired warrior about to go into a dragon's lair.

How to Use this Book
This is more of a practical section.  If you're a player, you'll want to read the sample adventure in this book, and let your friends also read it before you play.  It's better to have someone who can teach you the rules, but if you don't have someone to do that, one of you should read the other book, for Dungeon Masters, so they can fulfill that role.  This set contains all of the basic rules of play, and will take characters up to 3rd level, with the Expert, Companion and Masters sets for higher level play up to 36th.

Once you know what you're doing, this is extraneous text, but of course for kids getting this box set of a game you'd heard about - from older kids, from the TV show, from ads in comic books and such - it was sure helpful.

Acknowledgments
A big long list of names, alphabetical, including of course Arneson and Gygax.  A brief thanks to Donald Patterson and Harold Johnson, who introduced Frank to D&D at the end.

Nothing really to say about this.  Some names I recognize, some I don't.

Dedication
Frank mentions that the original rules were intended for die hard hobby gamers, and that this set keeps the same spirit but in a format that nearly anyone can understand.  Dedication of course to Frank's good friend, founder of TSR, and co-creator of the game, E. Gary Gygax.

Table of Contents
Edit: I'll add hyperlinks to sections as I review them.

The Player's Book is divided up into:
Center Pull-Out Sheets
There are some subdividsions I didn't list.  I'll likely divide future posts around these headings, maybe using some of the subdivisions if necessary to keep posts short.

So, not the most thrilling start to the series, but then this is cover to cover.  Gotta get these boring parts out of the way, I guess.

Posted by Dennis Laffey at 6:08 PM