The next three and a half pages of the Mentzer Basic Set's Players Book continue the tutorial, going over the character sheet and what everything on it means.  It repeats a bit of ground, going over your ability scores, hit points, and a few other things that the "Your First Adventure" section covered, and pretty much everything else that's on the character sheet.  A lot of the basics of play are covered here.

Again, it is written at a low reading level.  It was designed to introduce the concepts of RPGs in general and D&D in particular to kids who didn't have someone around to teach them.  It succeeded, but yet there were still areas in this section that I didn't get right for the first few years we played.  I guess I (like most 11 year old kids I suppose) didn't bother to go back and re-read sections I wasn't clear on, even though Frank explicitly told us to do so in bold print even.

But then isn't that what the spirit of D&D is all about anyway?  Take what you don't understand and ignore it or make something up to fill the gap?  So we completely ignored the Constitution stat for a while (unhealthy adventurers?  Didn't make sense), rolled a straight d20 for abilities instead of 3d6 (rerolling 1s and 2s since we picked up on the minimum 3 score, but ignored the maximum 18 - and yes, my Fighter Gwydion did have a 20 Strength, thank you very much!  Our characters were the Spinal Tap amps of D&D.), and a few other things. 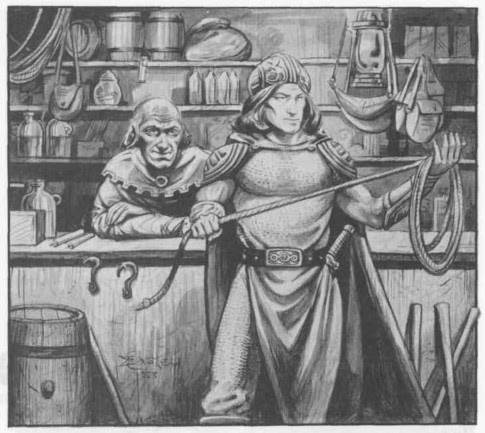 Getting back to the book, the section starts off talking about Alignment.  Before anything else, it gives us the info that Lawful equals friendly and helpful, Chaotic equals selfish and nasty (carefully avoiding using "good" and "evil" as the BADD/Jack Chick crowd were now paying attention), and Neutral is in the middle, sometimes selfish sometimes selfless.

We get a very important piece of advice next, always use a pencil.  Things on the sheet will change.  This has stuck with me, and I have belittled players before for using a pen.

Frank goes over each section of the character sheet, but because it's following the character sheet format, it can be a bit disjointed.  The information doesn't quite gel for me, reading it now.  Granted, this is just a primer, and more detailed information follows later.  We get explanations of basic game values (AC, hit points, level, the ability scores in a bit more detail, saving throws, etc.).

And on the back of the sheet we get info on magic items, normal gear, money, and experience points.  Frank points out in this last section that there is more XP to be gained from treasure than from killing monsters.  Even in the sample adventure, where Bargle charms and sleeps you and steals most of the loot you gather, you still come back with 200 xp from treasure and only 30 xp from monsters slain.  There's also advice that avoiding, treating with, and tricking monsters to avoid fights and get treasure without combat should be preferred.  I wish this advice had been repeated elsewhere in the rules, as I didn't go back and re-read this section often, unlike later parts of the book.  Our early games did tend to be hack-and-slash affairs.  Big monsters like dragons tended to inspire us to cleverness, but most creatures were just attacked on sight.

Overall, there are some gems of gaming advice here, and the basics are covered, but it didn't stick in my memory as well as the parts that were taught by doing (or at least done by proxy) in the previous section.

Posted by Dennis Laffey at 9:39 PM