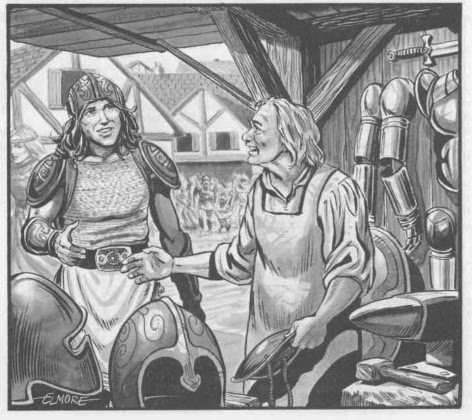 Continuing our read-through of the Mentzer Basic red box books, we get the beginning of the "choose your own adventure" style second adventure for the nameless Fighter.  Thinking about it now, I can see how well Frank is transitioning readers new to D&D into actual game play.  First we get a few snippets of evocative text in the Preface.  The First Adventure is all canned text with everything more or less predetermined. (I forgot to mention that you can actually die fighting the goblin in the Bargle encounter before Bargle charms you...otherwise all the fights are predetermined and after you take a certain amount of damage the monsters never hit again.)

This section of town business is like a cut scene, you've got no interaction at all, just a page to read.  But the solo adventure to come, being more like a CYOA book, gives you some real choice in the adventure, although it's more limited than a real game.  The "group adventure" in the DM's book is again CYOA style to a point, but the players have a lot of freedom to move around the ruins.  But I'm getting ahead of myself.  Needless to say, while these introductory/tutorial pages have little "replay value" in them, they do build nicely upon each other to ease people into the concepts and expectations of the game.

So, getting back to the text itself, we have a little story where "you" use the treasure from the first adventure to buy better armor.  You banter with the armorer, try on some plate mail, bargain down the price, then pick it up a few days later.  After failing to find any companions for your next adventure, you set off to the caves again, once more on your own.

And what can the new player learn from this?  Well, first is that being well equipped for an adventure is part of the game, and that town business can involve role-playing, which can be fun.  Good armor is a trade-off of protection for speed/carrying capacity.  Your new plate armor is heavier than the chain, so you can carry less treasure, but you're more likely to survive with it.

The usefulness of Charisma is shown again - but of course when we were kids, that lesson went somewhat over our heads and like many D&Ders we thought of Charisma as a "dump stat."  Of course, we used to roll ability scores in order like the book says, but we didn't worry too much about Charisma unless it was unusually high or unusually low.

The idea of safety in numbers is again shown, as at the end of the vignette you try (unsuccessfully, of course) to find some other adventurers to accompany you.

Yes, all of this is old hat to us veteran gamers.  It was new to me 30 years ago, and definitely helped me out in getting the tropes and expectations of the game [yes, I'm repeating myself].

Posted by Dennis Laffey at 9:55 PM