A week ago, we played another session of Justin's Vaults of Ur campaign.

Thidrek and Noctis having penetrated the Nightzone only to find stiff resistance from the undead army, and losing most of our men at arms, in our last session, we gathered together a much larger force.

Thidrek hired a platoon of twenty Orc Magi heavy foot, each immune to ghoul paralysis and packing a magic missile spell, and their third level captain.

The Venerable Carolus returned to action!  Maya had suffered a mind-body swap curse in some FLAILSNAILS adventure, so Alexei pulled out another Fighter/Cleric/Magic-User Elf from his files, and now I've forgotten his name...Earilion or something Tolkien-ish like that.  Sorry!

We penetrated to the heart of the Nightzone, and found the old fortress where some previous adventurers (Karl, Burg/Noctis, and a few others) had failed to recover a magical amulet.  Night was flowing up from the fortress through the ground.  After fending off a returning ghoul patrol, we went underground.

That's when we found ourselves in tight passages, with large numbers of ghouls and ghoul-centaurs (worm-like bodies, ghoul torsos, and praying mantis claws) all around.

Using a potion of invisibility and Alexei's elf's elven cloak, we found the leaders, Helemor the Awakened and a ghoul shaman.  In a large knock-down-drag-out fight, Thidrek was paralyzed and lost his sleestak horn, Noctis nearly died due to Helemor's ministrations, and Karl's spellcasting saved the day. 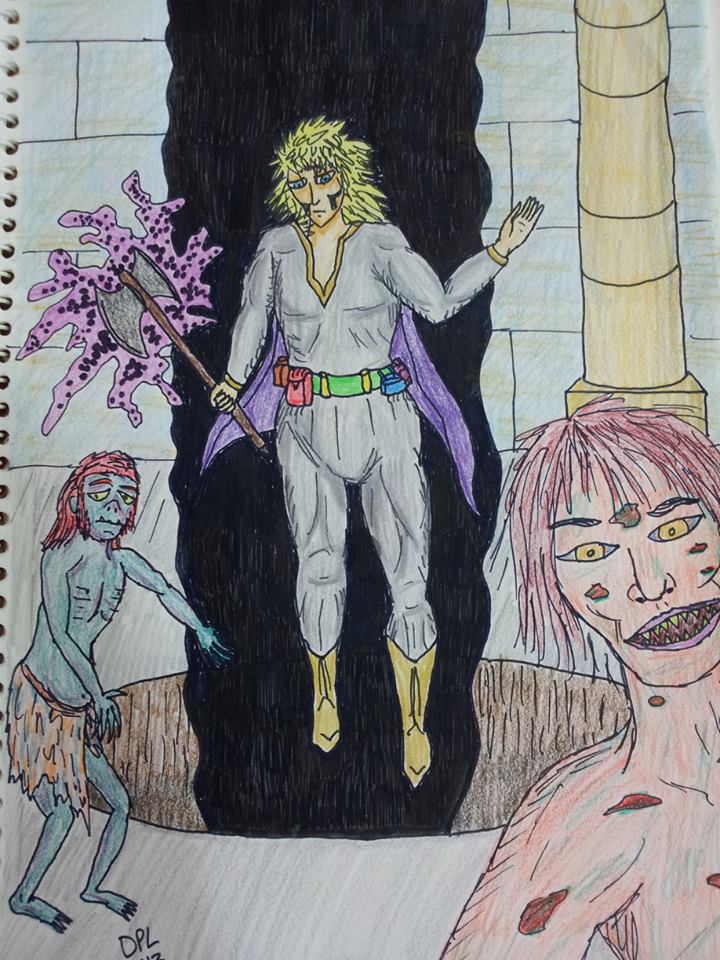 Helemor fled, the ghouls were destroyed, and we've still got about 1/3 of our troops.

We're playing a bit of exploration PbP on Facebook, so things are continuing...

Posted by Dennis Laffey at 9:02 AM