Ur: A new beginning

On Saturday, we played Justin's Vaults of Ur campaign, but with a new twist.  Justin had been wanting to try out the Stars Without Number rules, so we adapted them, using Sine Nomine's "Dungeons Without Number" variant spellcaster rules to do so.  Jeremy and I created alternate characters, while Dean just converted the now Venerable Karl (5th level thanks to some trips to Dwimmermount in James M.'s G+ games) to the new system. 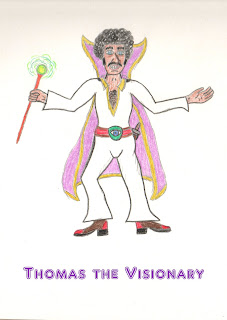 Jeremy created Burg the Orc, a former pit-fighter, while I actually did a conversion of my backup PC that I'd never gotten to play, Thomas the Visionary, a non-battle oriented Magic-User.  I used the Mage option from the DWN rules linked above.

We were based in the old Alchemist's Tower, which we had cleared out and then sold to the authorities in Fort Low, now a walled settlement named Crossroads.  Bandits had attacked and stolen a McGuffin...I mean amulet called the Pendant of True Heart.  We were charged with its recovery.

We set out and found the bandits' stronghold.  walls had been built incorporating two relatively intact buildings, with wooden watch towers also put up at the front of the square compound.  We were approaching from the rear, and spent some time scouting (Burg taking the duties since he's lightly armored and had some skill there thanks to the SWN skill system).  There were two pack-lizards milling around in the ruins.  We suspected a trap, but they were just as they seemed. 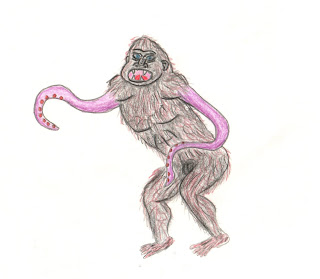 After clearing a way through the pole-spiked moat, Burg climbed the wall and busted his way in through a window.  We all climbed in and found a bunk-room.  Thomas picked up a book of pornographic woodblock prints and some dice, and we scooped up a few coins.  There were weird moaning and whimpering sounds coming from below.  Karl investigated the roof, and we found lots of dead bandit bodies and a lone, living octo-ape making the noise.  Below was a food storage room.

Using speak with animals, we found out that a "great dark" had attacked, causing burns but also making the bandits fight each other.  The octo-ape wanted to go home to the "jungle" (we assume he meant the zoo), but was anxious to find his "friend" who had been drug below by the Great Dark.

We investigated the ruins a bit more, finding a tunnel into the sewers, but also a strange branching path that appeared different.  Thomas had heard rumors of an ancient base in this area, and we thought that whatever the Great Dark was, it must have come from there.  It was getting late, though, and afraid that the Great Dark would emerge come nightfall, we quickly headed back to Crossroad.

The session ended there, but we picked it up again Sunday, with a few more players.  To be continued...