End of semester grading and some personal stuff have taken up a lot of my time. So not much blogging lately. And no real time to put together my final response to Alexis on why it's good to have some results of rolls secret from the players. It'll come eventually.

In the meantime, Jeremy was wanting to try a different game tonight -- Sharp Swords & Sinister Spells, but everyone was busy or not enthused. No offense intended to the game designer, who is a cool dude. I, at least, am feeling mentally drained from wading through the research papers of ESL learners and didn't feel like trying to learn a new system tonight.

Jeremy shared a Questing Beast video review of SS&SS, and he mentioned that there is a "background" option to let you flesh out the three character classes more. Of course 5E also has that. And maybe some other game Jeremy was pushing recently (or he just bolted that on from SS&SS into something else maybe).

It got me thinking about how skills have been handled over the years. OD&D through the RC has set abilities for some classes (dwarf detection, elf secret door finding, halfling hiding) that is usually X on d6, where the default is either "can't do it" or 1 in 6 chance of success. Then there are Thieves with their % skill system completely unlike any other. And later, other things not covered by the rules were usually suggested to be done by a roll under an appropriate ability score (on a d20, 2d8, 3d6, 2d12, or whatever). With the exception of Thief skills that improved every level, these skills also didn't change over time (unless you found some way to raise/lower ability scores).

Of course, the ideal of unified mechanics (a bad idea for many games IMO) in 3E meant that skills needed to be handled with the same swinginess of combat, that flat d20 distribution plus modifiers. This was, IMO, a bad move. Unless you really focused your character build (ability score boosts, feats, magic items), your skill use was really unreliable. Especially since the DCs for skill checks tended to go up along with your skill levels.

But all this thinking (on my bus ride home this evening) reminded me of something I've been wanting to dust off and implement for TSR and TSR-East. AD&D's Secondary Skills table. 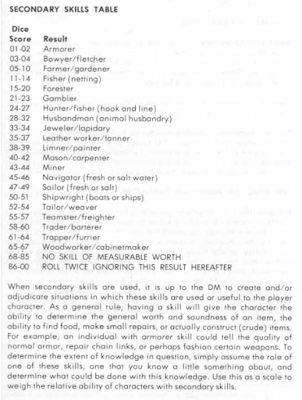 It seems, from the Questing Beast video review, that SS&SS does something similar to this, although a bit more free-form. You get to pick a background and whatever it is, if you're trying something related to that background, you succeed (or get a good chance to succeed on a roll).

When I was a kid, looking at AD&D for the first time, I thought this Secondary Skills system was too generic. I wanted discrete skills that could be applied, with defined mechanics for how to use them. After all, BECMI demi-humans and Thieves had that, in different ways.

But these days, I think the freedom to just negotiate what your character can do with the DM based on a descriptor like this is a good way to handle these things. We kind of did that when we were kids anyway without having a chart to roll on. It was often impromptu, and something that we just made up about our characters on the spot if it ever came up.

I had a Fighter named Falcon, and somewhere along the way his father's profession became important. I said he was a blacksmith. No reason, I just thought it sounded cool to have a blacksmith for a dad. From that point forward, Falcon was assumed to know a thing or two about smithing, including weapon/armor repair.

I really like that, and I think it's a much simpler way to add some flavor to the characters in an RPG than having to pour over skill lists and micromanage skill points or whatever. Complete 180 from when I was young.

Posted by Dennis Laffey at 9:22 PM