Mentzer Basic Cover to Cover: Making Up a New Character

Now that we've looked at all seven character classes, the rules go into detail about how to create a character.  Of course, during the introductory adventure, and after it in the section going over the character sheet, we got a lot of this information already.  But, as a teacher, let me tell you, repetition is necessary for education.  Sure, kids could have just read the book over and over again, as they obviously did with RPG books before and since.  But this section builds on prior knowledge already established by the tutorial section, so as we say in educational academia, the information is more salient to the reader.  And, as I re-read it, I'm finding again a lot of good advice.

Readers are advised that rolling a character may take up to an hour the first time, but with practice and experience, it may be as short as 10 minutes.  Players are advised to roll up a character before game time, preferably with the DM present to monitor die rolling, and the suggestion of getting everyone together to roll up PCs at the start is not a bad idea.  That sure can take time, though, even with such a simple rule-set, if everyone or almost everyone is new to the particular system, even one as simple as Classic D&D. 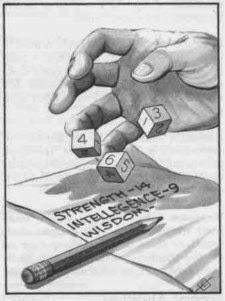 When it comes to rolling dice, Frank obviously takes the hard core old school method or rolling 3d6 down the line as the best method.  Play what you roll!  There are methods to ameliorate poor scores, such as PR adjustment and the optional score switch of the highest roll into the PR (which I always used) if someone wants to play a particular class.  We are advised that characters with no score of 9 or greater, or with two scores below 6, are probably not viable and can be rerolled.

However, you could always try it!  It might be fun to play a character with poor scores, even in the class's prime requisite.  And, as Frank notes, you can always roll up another character later.  In this age of coming to the table with a concept already formed, character builds, point buy, planning for prestige classes you will take at level 8 from way back at level 1, etc., that's maybe not something people want to hear.  But if I hadn't just rolled the dice and accepted it, Farley the Halfling would have never been played.  Nor quite a few of my other interesting old characters, or those of my friends and family members.  We took the lumps of poor rolls and worked them into memorable characters, rather than discarding them because we don't get to play Muscles McStrongman or whatever we were hoping for. 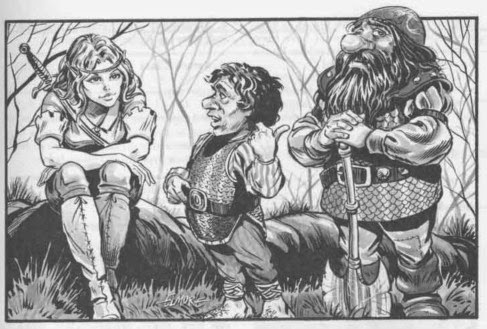 We're given the ability score adjustment rules in detail here.  You can raise your PR (only) by one point by lowering another score 2 points, but it can't be lowered below 9.  Con and Cha can never be changed.  Dex can be raised if you're a Thief, but never lowered.  This is obviously based on the rules in the LBB, including the restrictions that were in place when there were only Fighter, Cleric and Magic-User as classes.  They seem a bit arbitrary now.  Of course, in this age of the 4d6-L, arrange to taste method (or point buy, which anymore I dislike), it seems likely to not be used much.

Another area we always ignored was rolling for starting hit points.  From the beginning, we played that you got your maximum amount at level 1, and started rolling from level 2.  I've played in games where I had to roll, and really it doesn't make that much difference, but maybe it's just psychological.  You feel tougher with that maximum amount, even if you can still easily drop from one attack from a polearm.

When it comes to buying equipment, we get some good advice for new players.  Shop according to your class, don't buy things your class can't use, but be sure to get those things you MUST have (like Thieves' Tools or a holy symbol).  Magic-User characters are advised to buy extra dungeoneering equipment, since they don't need to spend money on weapons and armor.  See, right there, that's something you can do when you've cast that one spell for the day.  You're the guy with rope, 10' pole, spikes and hammer, mirror, lantern, etc.  You're playing the smart guy, go out there and play smart with the gear you buy!

We now get a lot of explanation of game mechanics, figuring out ability score adjustments, chances to hit, saving throws, armor class, another explanation of the hit roll process, stuff like that.  Not much interesting here, nothing really to comment on, as it's fairly technical.

It gets interesting again when we get down to the Intelligence and Charisma modifiers.  For Int, obviously a high score grants extra languages.  I've always liked the Mentzer take on low Int, as well.  Your literacy is affected.  Basically, if you have a low Int, you can't use scrolls (even Protection scrolls which everyone can use -- if you can read).

Charisma is again listed as important for interacting with monsters and for hiring retainers, but as pointed out, mostly the DM will need to know your scores/adjustments.  Back in the day, though, we rarely used retainers, and rarely tried to interact with monsters.  NPCs, sure, or the rare encounter with Lawful or friendly Neutral monsters.  But we would just act those out, not make rolls, usually.  Despite all our hack-and-slash tendencies (we were pre-teens to teens, after all...), we dispensed with the die mechanics and just got into character.  And I'm still partial to that, but rely on the dice from time to time if I'm not sure exactly what to have the NPCs/monsters do.

Naming your character: You can pick any name you like, but be careful of those silly names!  They may come back to haunt you!

Alignment: the way you want to play the character, not the way you think you should behave (emphasis in original).

Getting ready to play: Make sure you know the rules.  Have some idea what the other players' characters are like, and what you might be doing.  If you're a spell-caster, select your prepared spells.

Wow, that was a long section.  Four and a third pages.  And we're getting close to the end of the Players' Manual.

Posted by Dennis Laffey at 5:40 PM