How terrible I am, making you all wait over a month to hear my thoughts on the Halfling class as presented in Frank Mentzer's red box Basic Set!  Hopefully you found at least some of my posts about non-D&D RPGs interesting.  I know a few were duds since I didn't have much to post about for a couple of questions, but c'est la vie.  Anyway, on with the show, this is it!

What do we learn about Halflings?  First of all, we're given a very Hobbit-y description of the little guys.  Outgoing but not especially brave, love creature comforts, friendly with Elves.  Interesting how Dragonlance Kender, being immune to fear, have influenced Halflings in more recent editions to be less prone to fear effects than other races.

As for advice on how to play the class, we're told to act like a Fighter (so read up on that class for advice), and remember to use the special abilities as often as possible.  We're also explicitly told here that Halflings get good saving throws so they're more likely to survive spells, poison, etc.  Actually, looking back to check, Dwarves are explicitly listed as being "resistant" to special effects as reflected in their saving throws.  I think I missed that in my Dwarf post.

Touchberry.  Name ring a bell?  It's the sample character name in the little description of using your level title.  "I'm Touchberry the Warrior."  Sounds scary, huh?  Maybe if you're playing "Perverts and Penthouses."  Ever since I first saw that name as an 11-year old, I've always giggled at it.  New challenge for myself - play a Halfling named Touchberry while keeping a straight face about the name at all times. 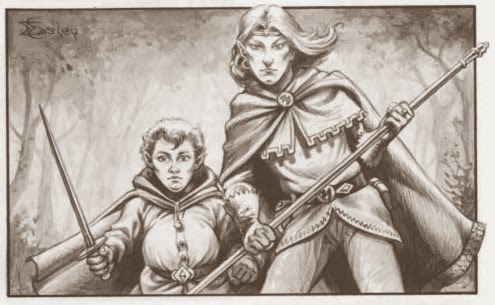 Something that's been hidden in the rules that I never really noticed before.  Halflings are more likely to advance faster than Fighters.  If you roll 3d6 in order or roll and place, either way, you are more likely to get a Prime Requisite bonus as a Halfling, and they advance on the same numbers.  Fighters must have a 13 Strength for a 5% bonus, 16 Str for a 10% bonus.  Not so hard to get if you roll and place as desired, at least for the 5% bonus, but especially if you roll down the line that 16 Str can be elusive.  For Halflings, they need EITHER 13 Str or 13 Dex to get a 5% bonus, and if both are 13+ they get a 10% bonus.  Much easier to roll a pair of 13s or higher than to roll a single 16 on a 3d6 roll or a 4d6-L roll.  Halflings are the only class in Basic that doesn't need a 16 to get a 10% PR bonus.

For weapon restrictions, we get a fairly vague set of limits.  We're told of a few weapons they definitely can use (dagger, short sword, short bow) and a few they definitely can't (two-handed swords, battle axes, pole arms, longbows) and just a vague "and other large weapons."  What about the normal sword?  Is it in or out?  How about a spear?  If 6' humans can wield 14' long pikes, surely a 3' Halfling could use a 5' spear?  It's up to DM judgment, but at this stage, we're assuming the DM doesn't have much experience on which to make that judgment.  As we played it back in the day, Halflings were fairly limited in weaponry.

Halfling special abilities are pretty cool.  They get some nice combat bonuses (AC bonus vs. large creatures, bonus with missile weapons of all sorts, individual initiative bonus).  The AC bonus is very nice considering Halflings can wear plate & shield for armor.  The slightly lower hit die compared to Fighters and Dwarves, however, makes them slightly less optimal as giant-killers, though.

Hiding is an awesome ability.  In the wilds, you are basically always wearing an elven cloak.  Even in dungeons, Halflings can Hide in Shadows better than a low level Thief, although Halflings suffer the restriction of not being able to move, and having magical light sources spoil the chance.

Basically, Halflings are the Ranger class of Basic D&D.