A few weeks ago, my son discovered my old Dragon Strike game.  TSR released it back in 1993, and my best friend Killingmachine got it.  We did play it a few times, but spent more time watching the cheesy "hyper-reality" VHS cassette that came with it.  We were already so into D&D that Dragon Strike just didn't scratch the itch.

My son wanted to play it.  He's 4, and can just barely read and write a few words (he's been able to read and mostly write the alphabet since he was 2, but we haven't pushed him to move up to real reading yet for a variety of reasons that only fellow students of educational theories or psychology might find interesting).  I knew he couldn't really play the game, but I set up the board and dealt out the cards, and dug out some minis to use (they've been in storage since we moved two months ago).  We called in my wife to play along.  My son chose the Wizard.  My wife chose the Elf.  After sorting out their spells, I picked a scenario from the book.

Imagine this.  My son is ready to play.  My wife is humoring us but really would rather be taking a nap on a warm Sunday afternoon while her son is occupied with me.  And I just forced them to wait for about 10 minutes while I read the scenario and set up things on my side of the board.

Granted, if I'd been prepared to play, like if it was a regular D&D game, I could have cut down this step.  If my son could read and therefor pick his own spell cards and magic cards, he could have done that while I did my setup.  But still, this game takes a long time to set up.

Anyway, we finally got to play for a while until my son got bored.  The game's mechanics seem to work fine.  They are just a bit too involved for my son (and my wife, too).  It wasn't very fun, either.  Kinda fun, but not very fun.  My son enjoys our free-form "Dungeons and Dragons" games much better, where he can let his imagination run wild.  I still prefer real D&D, where for the same amount of prep time, I can run a full game.

Since that time, we've scrapped the rules, and my son uses the boards like a play set, running figures around and just doing what he pleases, which suits him better. 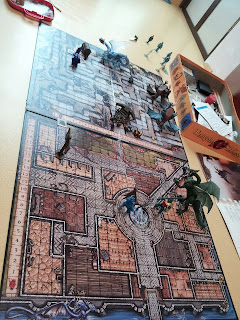 My son is using the Dragon Strike hero figures, my Papo/Safari dragons, some knight toys I got at the local "dollar" store, and some paper minis for monsters.

Dragon Strike is a decent bit of amusement, but it's not a great game.  I suppose for kids who don't yet have D&D, it's a fine gateway to the hobby.  But for anyone who's already playing RPGs, it just doesn't cut it.  If you want a light board game diversion for a night when you can't play D&D, I find the old Dungeon! board game much more satisfying (but don't have a copy, unfortunately).  The boards and minis that come with the game are handy if you enjoy those sorts of things in your games, though.

And for those of you who have never witnessed the awesomeness that is the Dragon Strike video, I present to you:

Posted by Dennis Laffey at 7:28 AM

Labels: board games, other stuff