"That?  That was nothing.  But that's how it always begins.  Very small."  -Egg Shen

So last night, Justin's three-part expedition to the Hive to aid Forager and help them against the Spiked Circle had its conclusion.  Part 1, Part 2.

The cast included: Ripper the Orc (Jeremy), Maya Culpar the Elf from beyond the Veil and her henchmen (Alexei), Elder Karl the Cleric (Dean) and myself as Thidrek the Sleestak.

A quick recap for those uninterested in clicking the links above.  We went to the Hive (a commune of symbiotic insects and humans) at the request of our friend Forager, who needed our help against his rival faction, the Red Men.  We learn of some human mercenaries helping the Red Men.  Lots of plans to get rid of them fail, but so do their plans to get rid of us.  The Spiked Circle (doomsday cultists/bandits) cause trouble.  The Great Minds of the Hive want to dissect my PC, but Maya gets a Sleep spell from them.  We learn of three Spiked Circle infiltrators who come into the Hive through the tunnels below.

We start out the day learning of the murder of three Hive farmers down in the pits below.  Investigating their deaths led us to discovering a new secret door that the assassins had used to enter the Hive, and tracks leading further in.  Also, some discarded waterskins that had a strange hippie herbal odor to them.

We followed the tracks until they branched three ways.  Some Red Men were following us, and we sent them down one of the paths to get the Spiked Circle, wondering if they would or not.  We chose another path, and followed it to another air vent room, similar to the "haunted" room we'd encountered in the first part of the adventure.  Climbing down with some rope, we reached the bottom and proceeded down the sloping ventilation shaft when someone above cut our rope.

Proceeding undaunted, we find a room with a big kettle of blue burning stuff sending smoke into the Hive's air supply (cue New Wave 80's music here, I guess...).  We put out the pot while Elder Karl chases a shadowy figure.  Maya went to back him up, but with his stone fist of mightiness, Karl managed to reverse the thrown clay pot green slime bomb back at the assassin and killed him.  Karl and Maya climbed up to investigate while Ripper and Thidrek retraced their steps to find the other Spiked Circle smoke pot(s).

Back at the ventilation shaft room, we encounter four of the mercenaries working for the Red Men.  They attack, and begin morphing into monsters - two crocodilian, one vulture-like, and one horse headed.  (Did Justin read this blog, or do great minds just think alike?)  Thidrek managed to hold the line long enough for Ripper to make a daring leap up into the room just as the rope was cut.

Maya and Karl find that the Hive is in a general uproar, rioting and fighting going on everywhere.  And they encounter the other two mercs, the leaders.  But when a sleep spell fails to have any effect and a henchman gets beheaded, burning oil and caltrops stop their advance and allowed the Elf and Cleric to meet up with Thidrek and Ripper, and none too soon.  Thidrek's shield gets shattered, but he has a spare.  Ripper only had one, and after successfully downing one of the croc-mutants, gets taken down by the vulture.  With the help of Maya and Elder Karl, the horse-headed mutant goes down.  Thidrek eventually takes down his croc-beast, and the vulture is defeated as well.  But we lost Ripper and the other man-at-arms.  Luckily, a cure light wounds spell by Elder Karl bound Ripper's soul to his mortal remains, so we have a chance to resurrect him next session.

Jeremy sat out for a bit, then as we were searching for the other smoke pots, I suggested he roll up a spare PC and get back in.  He rolled a Cleric named Parathys, I believe.  Justin dubbed him Parappa the Rapper. 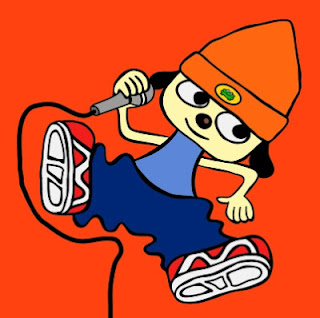 We find the next smoke pot and put it out.  We can see the third one in the distance.  Never trust the Red Men to do what they say.  We head down there, and find the old man merc, now basically mutated into a drider, guarding it.  The last two Spiked Circle assassins come out of hiding, backstabbing Thidrek and Karl, while the final merc comes up from behind (he was just a giant, deformed thing, not half animal) and kills a torchbearer.
Thidrek went into negative hit points, but not dead (luckily, unlike Ripper).  Maya made a bold dash past the deformed guy with his last torchbearer, who dropped a burning brand on the fallen guy, hoping for a detonation.  Karl tangles with the old man/spider thing.  Jeremy, fairly drunk by this point (it was nearly 1am as well), almost forgets to cast CLW on me, but does and Thidrek returned to the fight.  He took out his bug translation powder, and threw it in the spider dude's face.  Luckily, he failed his saving throw, resulting in lots of puking.  The fallen torchbearer blows up (right next to Ripper's corpse - I suggested the roasting would seal the soul in better for resurrection).  Forager and his men are making their way down to us.  The monsters and last assassin flee.  Forager's guys kill the assassin, but the monstrous mercenaries flee.

It was a good game, really tense.  I'm actually surprised that Thidrek managed to survive it all.  He was as good as gone a couple of times, but managed to always pull through.  We may need to let the Hive and Spiked Circle deal with their own matters for a bit, I think.  A good bit of treasure hunting in the ruins might be just what we need to get ourselves up to speed to challenge the Spiked Circle.  They're not the pushovers we thought they would be.  Not by a longshot.  But then you know what old Jack Burton says at a time like this:  "Have you paid your dues, Jack?  Yes sir, the check is in the mail."

Posted by Dennis Laffey at 9:57 PM