Beast of the Week: Sleestak!

I came home from work, and tonight my son wanted to watch "Marshal, Will and Holly!"  So we watched some Land of the Lost and he rewatched an episode of the D&D cartoon while my wife and I ate dinner.  And since I didn't get to post the creature I had been thinking about for this week, I figured I can save it for next week and this week present these classic creepy baddies for your dungeon stocking pleasure! 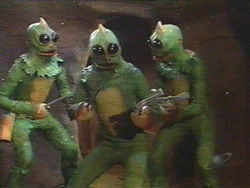 Sleestak are tall green degenerate humanoid creatures that combine the worst features of reptiles and insects.  They have huge, black insect eyes, green scaly reptilian skin, crested bulbous heads, and pincer-like claws on their hands.  They inhabit ancient ruins and deep caverns, where they worship the sentient skulls of their ancestors (the technologically advanced but ethically stagnant Altrusians) and protect their egg nurseries.  In combat, they can attack with their claws, and if both hit they can hold their opponent, often then attempting to drag the victim away to be sacrificed as food for their guardian dinosaurs or for freshly hatched sleestak babies.  They use crossbows in ranged attacks.  Sleestak cannot stand direct sunlight, and are at -4 to attacks and saves.  Continual Light spells give them a -2 penalty.  One in 20 sleestak, the keeper of the ancestor skulls, can cast spells as a 4th level Cleric.  There is a 25% chance that any sleestak lair will be protected by a large predatory dinosaur.  Sleestak speak their own language of hisses that is difficult for any non-reptilian creature to learn.

Labels: Beast of the Week, Land of the Lost, monsters, RPGs