Beast of the Week: Dokkaebi

OK, so I'm starting off my weekly monster series with a Korean monster very similar to the Japanese Oni, the Dokkaebi (or alternately spelled Tokebi or Tokaebi).  This creature looks much like the oni, but is said to be the spirit of an inanimate object made self-aware.  They have characteristics similar to many Japanese Yokai creatures, being at times scary, helpful, or comical depending on the story. 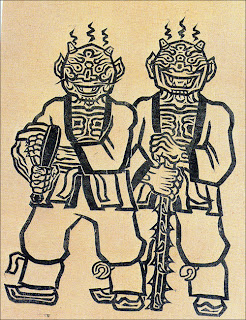 Dokkaebi are hairy ogre-like creatures standing 6-9' tall, with tusks, clawed hands, and unruly manes of hair on their heads.  They may be nearly any color, and their hair is typically a different shade from their skin.  Dokkaebi are creatures of justice, who seek out wickedness to punish.  When they are not punishing evil-doers, though, they often delight in playing pranks and jokes on those who have some peccadilloes but are not evil.

In combat, Dokkaebi fight with magical mallets or spiked clubs.  These weapons strike as if they were +2 magical weapons.  Dokkaebi also gain a +2 bonus to damage due to their great strength.  They are also fond of wrestling.  Instead of attacking with a mallet, a Dokkaebi can make an unarmed attack, grabbing an opponent and holding them with a successful attack roll.  The victim may Save vs. Wands each round to escape the hold.  Dokkaebi can make themselves invisible, as the spell, three times per day.

Dokkaebi can also use their mallets to "create" inanimate objects, as a djinni, except all goods are permanent.  The objects created are actually teleported to the Dokkaebi's location from some other place, not conjured from thin air.  Because of this, Dokkaebi are careful about how they use this ability, only conjuring goods when there is a great need.  Dokkaebi mallets only function in the hands of a Dokkaebi.

Posted by Dennis Laffey at 9:27 PM