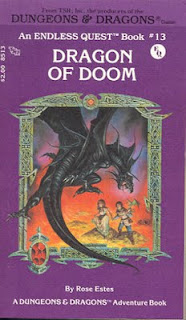 "The evil magic-user Zed has used a powerful, forbidden spell to summon forth the mighty Shen, the dreaded black Dragon of Doom!  Unless you can do something to stop him, Zed will turn Shen loose on the world to spread death and destruction wherever he goes."  --from the back cover

In yet another EQ book by Rose Estes, we get a mixed experience.  The story told in the book is fairly interesting, and has a few novel differences from other EQ books, but the 'game play' of the choices is limited.

In the book, you play Morgan, a young Magic-User sent to bring your imprisoned uncle home to the Council of Nine, but quickly learn, as the blurb above says, that he went mad in his Astral prison, and summoned the Dragon of Doom, who's more of an apocalyptic force of nature than a standard D&D dragon.  So of course, you've gotta stop him.  Your only help are your pseudo-dragon friend Hinoki* and your uncle's Ring of Wishes.

The book is novel in that at three or four places, you're taken out of second person narrative, to get a look at what Shen is up to as he answers the summons of Zed.  He's none to happy about it.  And the story over all is interesting.  You have some interesting encounters along the way to the confrontation with Zed and Shen, and while young, your character doesn't do too much whining and is relatively competent.

The big downside of the book for me was that the first choice pretty much divides the book into two paths, one of which is extremely linear (and I had the bad fortune to read that one first), and the other, while slightly less linear, isn't exactly full of interesting branches until you get toward the end.

On one branch, you just head off on your own through the wilderness, get some help, and track down Zed at the end of the world.  This one has lots of choices that don't really matter.  Either way, you end up at the same place.  Or there's a 3- or 4-way choice, where one leads to a bad ending, two lead to the continuing adventure, and the fourth, if there is one, leads back to choose again.  There's some really cool imagery along this story branch, though, especially at the end of the world.

The other branch involves Hinoki leading you to the secret Valley of Dragons, where you can get killed in a few interesting ways, or end up meeting the Great Dragon in one of two good endings just before Zed and Shen show up.  There are a couple of ways to get to one of these good endings, so it's not completely linear.

The cover is by Clyde Caldwell, and the interiors are by Harry Quinn.  Caldwell's Shen is way too small, from the way the book describes him (like 747 size!), but otherwise is a good evocative piece.  Quinn's interiors are good, but not quite as immersive as the ones he did for Pillars of Pentagarn.

Overall, this is not a bad EQ book, but I wouldn't rate it up at the top, either.  Worth a read, though, for some interesting ideas and imagery.

Protagonist: a young hot-shot M-U
Sidekick(s): a not-too annoying pseudo-dragon, possibly also a girl Saffron, and her cat Grundoon
Adventure: evocative if less than stellar in its choices
Artwork: Good, gets the job done
Endings: 3 good, 10 bad--somehow, Dungeon of Dread does a lot more with 3 fewer endings
Overall: a decent read

*Hinoki is the Japanese name for the Japanese Cypress tree.  Not sure if the pseudo-dragon's supposed to be an Oriental dragon, though.  We use a cream made of hinoki extract for our son's skin.