At the temple last Sunday

Last weekend, the family and I went to a Buddhist convent in one of the satellite cities of Busan.  Not much of interest to report, but I took several pictures of these statues at the foot of a bridge right in front of the temple. 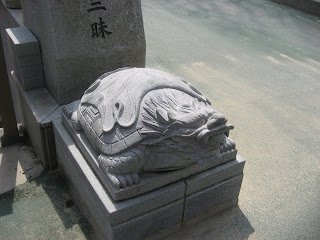 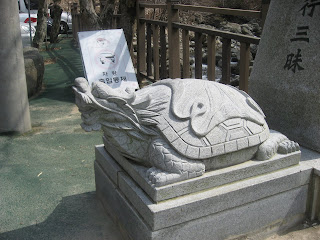 It's a Pi-Hsi, a Chinese mythical dragon-turtle.  Likely the inspiration for the D&D monster.  You can read more about it here, at Monstropedia, a pretty useful little website (even if a lot of the text does seem to be culled from Wikipedia).

I've got a write-up of this monster for Flying Swordsmen RPG, but it's on my netbook and I don't feel like powering it up right now.  Maybe tomorrow I'll edit in the stats.  They'll work well enough with your favorite flavor of the world's most popular fantasy roleplaying game (except maybe not if your favorite's 4E).

Posted by Dennis Laffey at 9:15 PM