The Temple of Rebyk (Part 1)

In tonight's Star Wars d6 game, Simon SBD-4 the sentient battle droid (Jeremy), Y'elenik the alien student of the Force (Dean), Oink the Hunter the Gammorean bounty hunter (Claytonian), and Wiz T. Fink the Mandalorian (Flynn, my son) were trying to book passage off of the planet of Baltoma when they were approached by a rich Zabrak woman. She explained that her brother had gone looking for some ancient legend of a "jedi" temple, if you could believe such clap-trap, and had gone missing six months previous. She offered the adventurers a hefty reward if they would accompany her to locate her brother.

While negotiating, they noticed a shifty character watching them, but when they tried to confront him, he ran and got away. They headed to the Zabrak's skiff but stormtroopers detained them, having heard a complaint of people matching their descriptions instigating a bar fight. While being questioned, Y'elenik let slip the word Force, which made the Imperial officer suspicious. When he said they all had to be disarmed and detained until the matter could be cleared, the PCs attacked. Despite a few mishaps, they managed to incapacitate all of the stormtroopers and the officer, and escaped before reinforcements arrived.

They took the skiff to the mountains, following a map the Zabrak woman had gotten from her brother. It showed the High Path and the Dark Way. They decided to locate the Dark Way. While camping for the night, rust mites swarmed their camp site, destroying the Zabrak's R5 unit and nearly doing the same to Simon before they were able to drive them off with a fire. 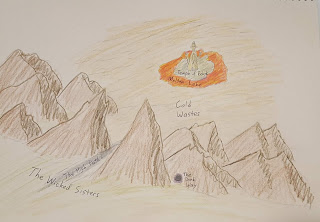 In the morning, the party found the cave and entered. After about 30 minutes, they came to a place where a cave-in blocked the path. Y'elenik examined the area and believed the structure to be sound, so Simon blasted a hole in the rubble with his big blaster (I think he's got a light repeating blaster). The party climbed through the rubble, with Wiz nearly getting trapped by a falling rock. About an hour later, they came to a chasm. Too far to jump, they decided to use the Mandalorian and Gammorean's jetpacks to fly over. Unfortunately, while carrying the Zabrak, Oink dropped her (1 on the wild die! Plus a low total anyway.) and she was mortally wounded. Luckily, Wiz flew Y'elenik down to her, and he used the Force and medpacks to stabilize her. Then they flew everyone back up and across.

We stopped there for the night. It was a pretty fun session! In just under 3 hours we accomplished all that, so I think it was a pretty good night.

Posted by Dennis Laffey at 1:08 AM