My university's semester started on Monday, two weeks late. We're teaching online only for the first month, maybe more. It depends on the COVID-19 epidemic. Korea seems to be getting it under control, but there could be more flare-ups. For the last two days, I've been working from home. And since I have this week's online lessons done, that means a bit of planning for next week's lessons, some paperwork, and answering student emails/checking assignments as they come in.

In the meantime, I've been doing some mini painting. I started up again at the end of last year. Since I've been back I've gotten a fair amount done. In fact, on Sunday I finished up the last of the minis I'd primed back in November. So yesterday I primed a bunch more. 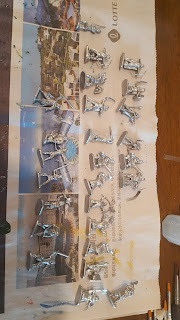 These are all 22mm minis from Caesar. It's a mix of three of their sets, Adventurers, Elves, and Dwarves. I've already painted two of them, the fully armored knight and the most Legolas of the elves. Painted both to look more feminine, since I have plenty of females in my West Marches game, and never enough female minis (one of the other packs, of which half the figures were painted in round 1, is Amazons for this reason). I'll probably paint one or two more this evening.

In addition, my son has been doing an online learning program (since before the coronavirus outbreak hit the US) and started in on the high school science program. Learning about space, we've been talking a lot (the Big Bang, the size of the universe, Fermi's Paradox). While discussing Fermi's Paradox, I mentioned the Prime Directive. And that got him...both boys, actually...curious about Star Trek. I sent them to Netflix to start watching TOS.

That also got ME watching TOS again! I've watched three episodes today. It's curious to me how few of the 1st season episodes I remember. When I was in jr. high and high school, one of the local channels syndicated The Next Generation and aired it 10:30 on Saturday nights (and yes, there were often arguments about watching Trek or SNL!), and then the original series after it at 11:30. And for a while, the Friday the 13th The Series after that at 12:30. Unless the syndication system left out some episodes, I'm sure I've seen every one of them. But quite a few just don't jog my memory. I just watched "Miri" and I couldn't remember seeing that one before at all. Maybe I'm just getting old.

And I guess I should be watching some Star Wars, not Star Trek, because I plan to run d6 Star Wars again on Friday. :D

Posted by Dennis Laffey at 6:26 PM