Came home from work late (grading papers) and skipping the board game meet-up, but there was a package waiting at my door.

A week or so ago, I used some of my Chanbara/paper minis earnings to order some new miniatures. I hadn't ordered any in a long time (several years), and browsing, I saw that a company I've ordered from before, Red Box, had some new sets of fantasy minis in a line called Dark Alliance. Lots of them! (Other sets only labelled Red Box are historicals.)

I'm not actually using minis in my West Marches game, but if I start, I thought it would be good to have some more female adventuring types. And some of the new sets were Amazons. There were also some Cimmerians that looked cool. So I ordered them. Shipping to Korea was a minimum $35, so I figured what the heck! I got those two, plus some "half-orcs" that look nothing at all like Saruman's uruk-hai from the LotR films...no, nothing at all! Just coincidence! ;) And I saw they have some "fire demons" which again, any resemblance to balrogs, living or dead, is purely coincidental! And another company I've also ordered from before, Caesar, has some lizard man (sorry, lizard folk in these non-gender-specific times) figures as well. Didn't up the shipping cost, so I got them all. 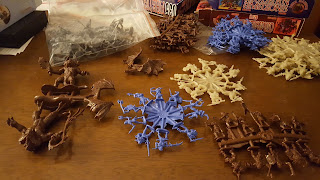 When I opened the boxes, here's what I got. The Caesar lizard-people were not on sprues, although a few had bits of sprue still attached. And their shields, and two poses' arms, were on sprues to be detached and attached to the minis. I'll get around to that some other day. All the Red Box minis were on sprues.

Obviously the two big guys are the (can't be called) balrogs. The blue are the Modern Amazons (looked the coolest of the various Amazon sets). Brown are the half-orcs. White (the color really resembles the old glow-in-the-dark plastic toys you'd get in cereal boxes back in the 80's) are the Cimmerians (Set 2, which I chose mostly because they have a wizard/shaman pose - farthest back in the picture below). The lizard-personages are still in the bag, in gray.

Now, Red Box doesn't have the crispest sculpts. I've ordered from them before (orcs for sure, maybe some others). I'm fine with that. When I'm gaming, I want figures that can represent PCs and monsters. They don't need to be works of art. But the first sprue of Cimmerians that I pulled out was so covered in flash. It looks pretty bad. Luckily, it was only that one sprue. And I think this must be a mis-labeling not just a bit of luck on my part. The Cimmerican box says "33 figures in 11 poses" and shows 11 poses on the back, but each sprue has only 10 poses. But, and here's where maybe I was lucky, there were 4 sprues. So I got 40 figures in 10 poses. 7 figures ahead, even though I'm one pose short. 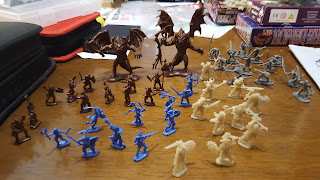 I took one set of figures from each set off of the sprues this evening. Since I'm planning to use these for RPG gaming rather than war-gaming, and I'm not using minis at the moment, I figure there's no rush to get them all off the sprues. It's not like I've bothered to pain the Caesar "Adventurers" or the other sets (goblins, dwarves, elves) I'd bought from them, or the orcs and whatever else I'd gotten from Red Box a few years back. They're all still unpainted. One of these days...

Oh, and I should note -- if you're thinking about getting these, be warned. They're true 25mm scale. They're tiny next to a Reaper heroic scale mini. If you have lots of Halfling, Gnome, and Dwarf characters, you could use them together and they'd be fine. Those balrogs will still tower over a Reaper, though.