A while back, I was reading an article about a new exo-planet that was discovered, and scientists think that it may be in the Goldilocks Zone, but tidally locked. That got me to thinking what conditions on a planet like that would be.

The planet orbits its star, and rotates perpendicular to the axis of rotation. In other words, it would appear from a fixed point in space to roll along its revolution. If you are on the planet, one side constantly faces the star, and the other side constantly faces away. Habitable zones, if there were any, would be along the equator. The day side would mostly be too hot, and the night side too cold.

So any life on the planet would likely be in the perpetual twilight/dawn of the equatorial zone. 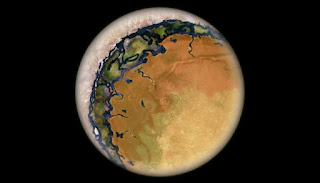 And THAT sounds a lot like the Realm of Faerie as described by Poul Anderson in Three Hearts and Three Lions.

And THAT sounds like a great setting for a sword-and-planet style game!

There is no night and day. Time is kept by the moons (this planet should have more than one) and the procession of the stars through the sky. "Days" or hours would be kept by the rising of certain constellations in the sky.

Sounds like a cool setting for either straight D&D fantasy, or for a sword-and-planet style mix of tech and magic.