Yesterday in my West Marches game, the players managed to complete the Bugbear Cave in the Caves of Chaos. Those of you familiar with the module will remember that...


...the bugbears have two prison chambers. In one of them is a renegade bugbear and a captured 4th level Fighter (or Hero). In the previous session the players managed to free the other prisoners. Yesterday, they freed these guys (after slaughtering the captured gnolls, who to be honest had it coming).

Now, I've been having a bit of eye trouble (an eye infection I had a few weeks ago seems to be lingering but of minor annoyance level) and I was having a bit of trouble focusing on the printout (I have the module in PDF, so printed it out for use at the table). 30 year old module with cramped typesetting, then scanned however many years ago and converted to PDF, then printed out doesn't make it the most readable.

The description of the human prisoner is also spread over two pages.

Anyway, I read the beginning of the description: huge and muscular, with a shaggy beard and wild eyes. I kinda glanced over the back side of the description while the players were asking me about him, and saw that he's a berserker who has a chance to "accidentally" strike the players if they fight alongside him.  But I didn't keep reading to the part where it says he'll betray the party the first chance he gets and abscond with the treasure.

Anyway, they were asking for his name, and how big he was compared to the party's Berserker (my homebrew version of the 3E/5E Barbarian for Classic D&D) and the Muscle Wizard (just a Magic-User, but with a 16 Strength and good Constitution as well). He's more muscular than both, with a Str 18. And the wild eyes and beard description made me think of Macho Man Randy Savage.

So, Randy the Savage he became. Oooo yeah!!! And he didn't end up hitting an ally during the next fight with fire beetles. But since he had no armor, when they found the shield +1 in the store room, they gave it to him. So he did abscond with some of their treasure. :D

Anyway, he's now an NPC in town who might be persuaded to accompany the PCs on future adventures.

TL/DR: I made an impromptu characterization of an NPC as a classic era WWE wrestler.

Last night, I was looking for wrestler-themed fantasy art. I've got a picture of Hulk Hogan as a Conan-style barbarian from somewhere (had the picture for many years). I've seen luchador fantasy before. But no one seems to be producing art showing WWF/WCW/WWE wrestlers facing dragons and zombies and whatnot. Curious. 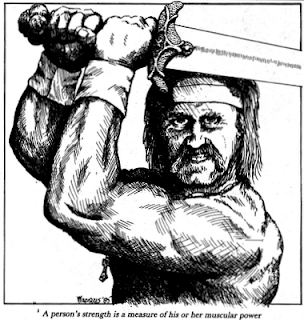 Anyway, I now have a plan to turn a bunch of 80's/90's wrestling characters into NPCs who could become retainers. And they won't all be warrior types. Some will definitely be spell-casters!

Posted by Dennis Laffey at 6:13 PM