I've been thinking of interesting ways to promote Chanbara besides just spamming everyone's G+/Facebook feeds with links to the game. No one wants that, and I don't like doing it. So, I'm going to post some of the characters that appeared in the play testing of the game over the next few weeks. Hopefully, seeing the interesting characters that people played in the games I ran will drum up some interest in the game.

First up is Jokichi the Vagabond. Jokichi was played by Justin, who ran the awesome Vaults of Ur campaign that I posted about many years ago (I played Thidrek the Sleestak). In my first round of playtests, Justin came up with a great character so I want to highlight him first. 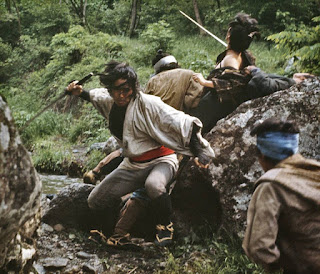 As you can see, Jokichi was of Eta social status which Justin was happy to play up, and didn't get upset when NPCs treated him like garbage. Due to a lucky roll, though, the daimyo's niece was fond of him and there were hints of a "doomed romance" plot started that never got off the ground because Justin wasn't able to play the entire playtest campaign. Too bad, it seemed like it would have been a lot of fun.

Possibly because of the poor treatment he had at the hands of his employers, when the party went after a group of pirates, Jokichi tried to sign up. None of the players were sure if Justin was just doing it as a ruse or if he really intended for Jokichi to become a pirate. As GM, I was willing to let the campaign become one of nautical plunder if the players wanted to. In the end, though, the players managed to defeat the pirates (with Jokichi's eventual help), and continued on to serve their daimyo.

Since Justin couldn't continue playing, we decided that the authorities put the blame for the mission's blunders (they stopped the pirate leaders, but the ship and its cargo got away) on Jokichi's head, and he was confined to quarters. That way, if Justin had returned, we could roll out Jokichi again by saying he'd served his term of punishment.

He was a trouble maker of the first order, and the early playtest games were really lively because of the chaos Jokichi brought to the staid lives of the more honorable characters.


*Since I was trying to playtest the exploration, combat, and magic rules in the live game, I didn't worry about allegiances. In my play-by-post game, I did, and I'll provide some of those characters and their allegiances in future posts.

Posted by Dennis Laffey at 4:42 PM