Stefan, who playtested, edited and was there for me to toss ideas around with when making Chanbara, is more into anime than I am. I don't hate it, just never really delved deeply into the waters that are Japanese animation. When he was playtesting the rules, he made a few mods to bring his game more in line with anime (while mine was Lafcadio Hearn stories directed by Kurosawa Akira). 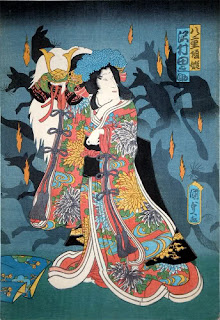 Now, he's developing an alternate spellcaster class for the game -- the Ganshu -- based on the 3E/4E/5E Warlock model. I think it may need a bit of playtesting for balance, and so far he's only got one profile up: the Miko (shrine maiden). The other profiles he's working on are the Tsukimono-mochi, which has a very creepy pact with yokai vibe, and Shotokandoka, which is straight out of Street Fighter II or other 90's fighting games.

And if you don't have Chanbara yet and have no idea what I'm talking about, you can check it out here! Only $10 for the pdf, $20 for print or print/pdf bundle.