While in general I'm fine with "save or die" poison in RPGs both as a GM and as a player*, my recent foray into reading Mentzer Basic cover to cover (many monster venoms in Basic have a time delay before death, but potions/spells seem to be immediate), some reading up around the web about actual effects of poison (wracking pains, vomiting/diarrhea, muscle spasms, impaired cognition, nerve/tissue damage), and Alexis's musings on poison back in November got me to revise how I handle poisons in Chanbara.

I'm not 100% sure this is the best way ever to handle poisons in game, or anything like that. But it is a bit different, allows for a few different types of effects of different poisons, and tries to remain simple enough. It does require a bit of reference-checking for me still, but I think if I played with these poison rules long enough, I'd probably get them down in my head without needing to look them up.

I have divided poisons into four types (the names are not really relevant to their real world meanings, necessarily). Each does some damage over time, but also has another "side effect" such as sleep, paralysis, sensory deprivation, pain/vomiting/diarrhea/other hindrances, mental stupor, and yes, instant death. It may require a bit of extra book-keeping, but it also allows GMs to ignore any of the types they don't like. If you don't want Vizzini to just keel over a few seconds after drinking iocaine-laced wine, don't use the deadly poisons in your game.
In addition to having four broad types of poison, each one is listed with a strong/normal/weak dosage, which affects the duration. For most, a stronger dose has a longer duration, but for the deadly poison it's reversed (it kills you quicker). Characters take damage based on the strength of the dose over the duration of the effect. This is one area I like in concept, but I'm not sure if it works well in practice. The stronger doses of non-deadly poison deal more damage, but less frequently. Weak doses could be unbalanced as written due to the fact that the damage is concentrated into a short time, even though the dice being rolled for damage are smaller. Some people also may not like the fact that "sleep poison" doesn't only put the victim to sleep, it also deals damage to them. Well, nothing's perfect about this game, and Marilyn Monroe and plenty of other people have died from taking such poisons.

And to quit rambling on about it before anyone besides me really knows what I'm talking about, here are the snippets of rules from the draft. First are the players' side prices and types of poison commonly available (at least for criminals or Shinobi) from the equipment lists (mon is the standard silver coin of the realm, equal to a normal D&D gold piece). 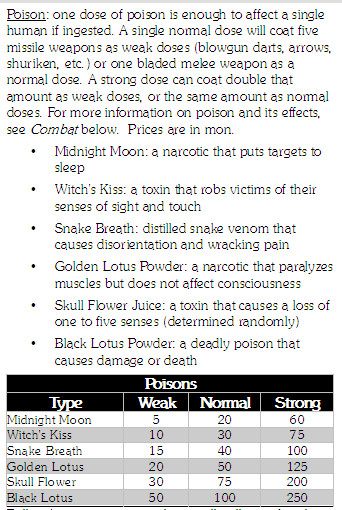 The actual game effects are kept "behind the screen" so GMs can choose to add a bit of uncertainty with respect to duration/damage dealt when PCs use poison on monsters if they choose. Or, if they want they can reveal the mechanics behind the poison to the players. Those mechanics are (as they currently stand) found in the Combat Rules section of the text: 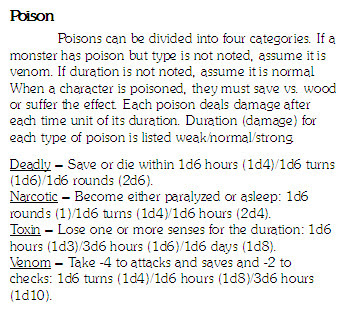 Finally, to help you gauge how useful or not it might be to rob a monster or NPC of their senses, paralyze them, etc. I present rules from the Combat Rules section that describe a variety of conditions or "status effects" to borrow the video game nomenclature. 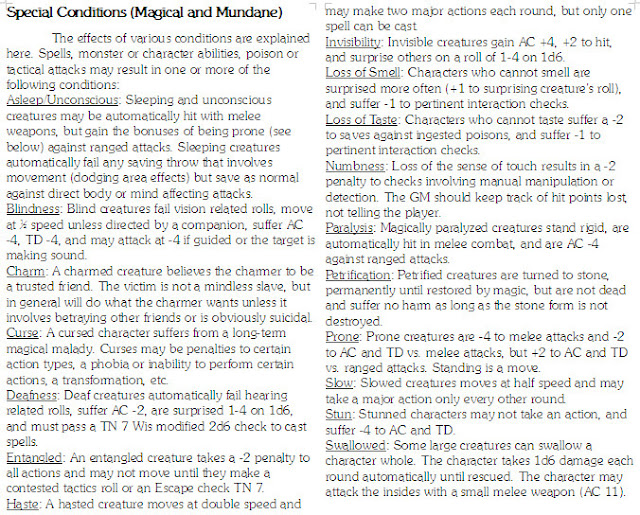 A few notes: AC is of course armor class, TD is Tactical Defense - like AC, but for special maneuvers like disarm/trip/wrestle etc. (borrowed idea from Pathfinder). TN is target number.

*Save or die is simple. There's not really much you need to worry about remembering during an often messy, chaotic battle, or typical rambunctious RPG session. You get bitten by a giant spider and test your luck. Done.