Beast of the Week: Slimer

Somethin' strange in your neighborhood?  Who ya gonna call?  Ghostbusters! 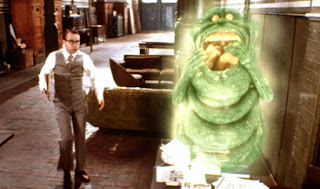 Slimers are bulbous green lesser ghosts made mostly of ectoplasm.  They can pass through solid objects easily, but leave a slimy coating of ectoplasm behind when they do so.  While mostly immaterial and only damaged by spells or magic weapons, they can manipulate physical objects to a limited extent (Str 3).  They are constantly hungry, as eating replenishes their ectoplasmic mass.  In combat, they do no damage when they hit, but they coat the target with ectoplasm, imposing a -2 penalty to hit rolls, damage, and saving throws.  Anyone hit by a slimer must Save vs. Death Ray or all consumables and paper products (including rations, potions, scrolls, maps and spellbooks) are ruined by the slime.  The slime can be washed off normally, but requires large amounts of water.  Slimers have all the normal undead immunities, and are Turned as wights.

Posted by Dennis Laffey at 9:43 PM