Welcome to my parlour said the spider to the Hive

Last night, Justin ran a closed session of his Vaults of Ur game on G+ Hangouts.  The members were just the Korean players (or as we now call ourselves, the Mao-Tse-Tigers*), myself as Thidrek the Sleestak, Justino with a new Cleric Aetius (follower of the Flying Spaghetti Monster), and Jeremy with a new Orc Ripper [follow the link for a pic] (in Justin's game, BX/LL Dwarves are Orcs, Elves are Orc Magi, and Halflings are Beastmen - or in my case, Sleestak).

We had several rumors, but one that I thought was good to follow up on was that one of the Hive had come to Fort Low looking for the demon-slayers (us, sort of, as Thidrek's the only one left - although Howard the Enchanting and Flinny the Elder could return through inter-dimensional portal some day).  Seems the Hive had been tunneling and found a new passage that got them attacked by something.  They wanted us to go and kill whatever it was, and offered us some shiny rocks if we'd do it.  I also managed to score the money I needed to equip myself by selling my services as a translator to the Fort Low authorities.

We've got a powder, given us by the Hive members, that we snort up our noses and allow us to communicate with the humans and insects of the Hive.

Tunnel fighting meant we stocked up on torches and flasks of oil.  I also had a crazy idea which ended up saving my poor scaly green hide.  I bought four chickens and put them in a sack.

The Hive member, who is the highest authority among them we've met so far, then led us to the location of the attacks.  There we met Forager, a dude we met on the previous expedition to the swamps - he carries a distinctive club made of a giant beetle mandible - and two more Hive lackeys, plus two giant beetles.  [Justin let us know we'd get XP for any allies that made it out alive.]

We followed the remarkably smooth and round tunnel for a ways, then came to a large cavern with an underground river flowing through it.  We climbed up on a ledge around the edge of the cavern, then heard a splash in the water.  On alert, we waited and watched.  With my infravision, I spotted a humanoid shape moving around on the far side.  I asked Forager if the things that attacked were humanoid, he said no.  I thought it might be an NPC adventurer or something, so I was going to just let it go.  Then it returned with two more, and they started running to the river.  We assumed they were charging us, and opened fire.  They dove into the river and disappeared, with only Aetius scoring any hits on them with his sling.

Then one of the beetles started sending off "danger" pheromones (which we could see, thanks to the bug powder).  It indicated the tunnel behind us.  Assuming the lizard men (who had disappeared under the water near a big rock) were coming around to flank us, we coated the ground with oil, set up our Hive lackeys with spears read to receive a charge, and waited.

I took out chicken #1, and sent it down the tunnel.  A few seconds later, its panicked clucking was cut silent.

Ripper then proceeded into the tunnel, thinking to draw the lizard men out into our ambush.  He didn't find any lizard men.  He found a pair of giant spider-ish things, one of which tried to grab him with its arm-like appendages.  [Metagaming, I knew right away they were Rhagodessa, and that we could be in trouble.  I didn't say anything, though.]

Ripper returned, and as the party started into the tunnel to fight the spiders, I saw two more coming along the river bank.  I stayed back to light the oil when they tried to come in, while everyone else went cautiously forward to try and kill the ones that Ripper had seen.  I managed to hold off the two at the rear, and all hell broke loose in the front.

Ripper, Aetius, and Forager had managed to coat one of the Rhagodessa in oil, but then the second one attacked.  I got there about the same time that the other two spidery monsters arrived.  So it was a melee of us three PCs, three human NPCs, and two giant beetles against four Rhagodessae, one of them on fire!

In the battle, Thidrek was grabbed, but managed to avoid getting bitten by shoving another chicken down the beast's maw (told you a chicken saved my life!), but Forager, one of the beetles, and one of the lackeys were not so lucky.  Aetius's magic saved Forager, though.  We killed three Rhagodessae, the last one escaped.  I got to do a Sleestak Victory Dance twice, getting in two killing blows with my sword.

Ripper and Aetius searched the bone pile in the lair, but found only chump change.  We didn't see any sign of the Rhagodessa that ran, nor the lizard men.  We gathered our fallen, and the corpses of the giant spider beasts, and headed back.

The Hive was pleased, and we've now got a free pass in their territory, plus a nice gem each.  We may also be able to do something fun (or at least profitable) with the Rhagodessa corpses.  And I've got a plan to try to rope the Hive into aiding us in wiping out the evil cult of beastmen that nearly killed Thidrek in the last session, the Spiked Circle.

And after 4 sessions, and surviving all 4 expeditions, Thidrek is now Level 2! 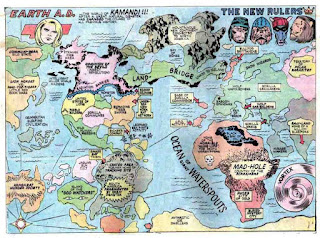 Read Justin (the DM)'s write-up of the events here!