I just skimmed through the first section of OD&D's Volume 3: The Underworld and Wilderness Encounters.  Having started playing D&D with Mentzer, a lot of the information was actually pretty familiar to me.  that's why it only got a skim.  I'm probably missing a few important points, but for the most part, Gygax and Arneson had figured out a lot of good advice for creation of a dungeon.


Of course, Gygax assumes creation of a Megadungeon, similar to his Castle Greyhawk.  By the time Mentzer was re-editing the Moldvay/Cook edit, more thought went into creation of smaller dungeons with specific purposes.  But all of the above main points were still there.  There's not a lot of actual advice for the crafting of the dungeon, other than the sample map and semi-explained key, and the example of play, though.

I do like the fact that in the sample dungeon, there's a 'special' which he notes is basically a Dick DM move to use, so don't use it.

Interesting differences from the later Classic D&D game include (old news to some of you, of course):

2 moves per Turn while exploring.  I guess this was taken from Chainmail, with its split moves each turn to allow for reconsideration/reactions.  240' (120' encumbered) per 10 minute Turn is still really slow, but better than in the later editions.


*I'm guessing that this picture of Gary's notes for Castle Greyhawk are so sparse because it's just the specials only.  The rest he was able to simply roll randomly as he ran the game.  Or maybe not even roll by the time this picture was taken. 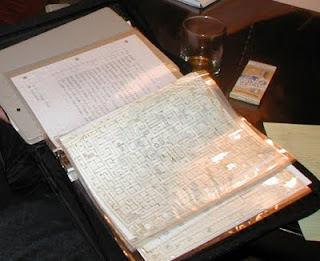