It's less than an hour to St. Patrick's Day here in Busan, so I thought I'd post something about it.  It's much more positive than the post I had been thinking of posting, and more game related as well.* 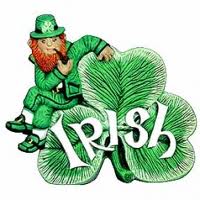 There are a few Irish beasties in D&D, but mostly in AD&D, not so much in Classic D&D.  Being half-Irish descended, I feel like I should stat up a few more of them.

Well, I don't have time to do it tonight, but maybe in the near future.  In the meantime, here are a couple of links to some Irish/Celtic legends that hopefully might inspire one or two of you to DIY something for your games.

Here's another site that looks nice that I found with a quick Google search. (link goes to their monsters page, there's more than just monsters on the site)


Happy St. Patrick's Day!
*I was thinking of doing a post complaining about the idiots on Facebook/Twitter who think the earthquake/tsunami were God and/or Fate's revenge on Japan for Pearl Harbor.  But really, I only need to respond to those idiots with two words: Hiroshima, Nagasaki.  Plus, that's got nothing to do with gaming.