This is an idea for a game I've had for a long time now. And apparently I discussed it mostly on G+ instead of here on the blog. I did a search of the posts here, and only found a few mentions of it.

So what is Caverns & Cowboys? Not hard to guess. It's a Western themed game, but also a fantasy dungeon crawling game. Or that was the original idea. I'd thought maybe run it with a combination of Go Fer Yer Gun (or later Tall Tales RPG) mixed with Labyrinth Lord/Classic D&D.

I even made this map as a bit of a trial at a Wild West setting that isn't part of our real world. Did I share this map before? Maybe. I know I shared it on G+ a few years ago (the image file shows I made it in 2017). 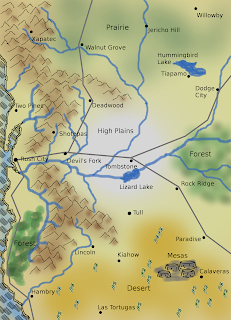 Anyway, I let the idea go for along time. Now I'm back on it. Only not using a D&D style OSR game.

A few weeks ago, I started adapting the Star Frontiers rules for a fantasy Western.

Why Star Frontiers? Well, for one thing it's a skill/level based system rather than a class/level based one. The skill system allows more flexibility to create characters that cover lots of different archetypes.

In SF, and in C&C (this iteration of it anyway), you gain a handful of XP each game session, and a few more when you complete an adventure. Then you can spend them to improve your character's base ability scores and skill levels. You can add new skills easily just by spending a few XP if you want, or you can save up to level up your existing skills.

SF has Military, Technological, and Psycho-Social skill areas. I have Interaction, Combat, and Magic skill areas. Yes, instead of Vancian magic, I'm going with magic as a skill. The spells are your subskills, and you have a limited number of spell points to use to cast spells. Gaining levels in the magic skills increases the potency of the spells but not the cost. There aren't really many flashy spells like lightning bolt or fireball, though. I tried to go with 19th century thematic magic types.

I just need to get the rules for awarding XP and for placing treasure/monetary rewards written up, and I'll be ready to start play testing it.

Posted by Dennis Laffey at 5:52 PM