Get your game on with Chanbara!

I've just put the ebook version of Chanbara up for sale on DriveThruRPG. Here's the link: 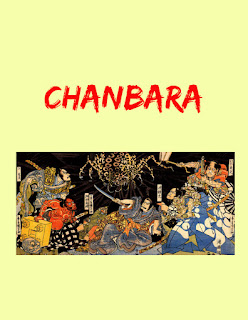 The print version proof is on the way, but I may have mentioned that post from the States to Korea has gotten really slow over the past year or so. It used to be about a week for packages to arrive. Now, possibly due to increased volume (Korean re-shippers allow Koreans to order all sorts of stuff from American Ebay, Amazon, etc. that normally doesn't ship overseas) through Korean Customs, it takes about a month. Hopefully it will arrive sooner rather than later.

Here's the rundown on what you'll get if you choose to purchase:

A Role Playing Game
Demons whisper in the sleeping ears of influential ministers. Ogres and spirits harass villagers that wander too far into the mountains. Ghosts haunt ruined castles and forgotten temples. Rebellious daimyo scheme to usurp the Shogunate. Heroes are needed to protect the Jade Islands from the supernatural threats that are on the rise.
In Chanbara, players take on roles such as stoic samurai, stealthy ninja, or idiosyncratic yamabushi. In addition to battling monsters, spirits and demons, these heroes need to balance the various obligations and duties to clan, lord and society in a regimented culture. Being selected to battle the forces of evil does not excuse one from obligations or strictures of honor and duty.
Chanbara plays like traditional fantasy role playing games. Players control characters who explore dangerous locations and battle monsters and bring back the treasures they hoard. Unlike other games where characters amass wealth in order to purchase magic items, build strongholds or else carouse away their winnings before adventuring again, in Chanbara the characters are not gathering the treasures for themselves. They turn over the wealth they acquire to their lord, clan, temple, or some other cause they serve in order to advance their interests. By doing so, they gain status, fame, and positions of power.
Chanbara is an OSR style RPG based on Japanese fantasy tropes. In 64 pages you get a complete RPG for dungeon, wilderness, and urban adventures.
The book includes rules for:
Did I mention that all this fits in only 64 pages? And there's plenty of evocative art from actual Japanese artists whose work is now in the public domain.
Print Version: a 64 page softback with color interior artwork. (Available after inspection of proof. Coming Soon!)
Ebook Version: a 65 page (including cover pages) PDF with hyperlinks in the TOC, Index, spell list (by level), and internal rule references ("see p. XX for more").

Posted by Dennis Laffey at 2:34 PM