This post covers the next few sections of this grab-bag of game rules, from Dice to Higher Level Spells.

Dice
First off, we're told that the dice included with the Basic Set are all you need. While technically correct in that you can (and we did) play games with only those six dice, you and I all know that you always need more dice, right? It's like that first set in the box were free, and you just had to have more...and more...and more!

Now, I did spend many years playing with only the sets from the Basic and Expert sets, plus a few old ivory six-siders that belonged to my grandpa. And I've still got all of them, and still use them on occasion (most often when I'm DMing). I've got a nostalgic connection to those dice. But I've got LOTS more, and when I see dice in a shop I've got an urge to buy more. Maybe you do, too.

Anyway, we're next told that when there's a random result range, the DM can either roll or just select the desired amount. That's fine. No reason you must insist on everything being random. And we're told that it's also OK for the DM to roll the dice, reject the result, and decide on something different. Now, this will rub some people the wrong way, because the example given says if a character down to 3 hit points gets hit with a sword (1-8 damage) and could easily die, the DM can ignore the result and just announce 2 points of damage were dealt, giving the player a chance to retreat. I took this to heart as a boy, and would very often fudge results to keep PCs alive. Now, I'm less likely to do so. But I don't completely frown on the practice as some do. There are times when fun should trump the dice. Feel free to disagree, I won't think less of you.

And finally, rather uncontroversially, we are given notations about how to figure out what dice to roll for different spreads of numbers. 1-6 means roll 1d6, obviously, and 2-8 means roll 2d4 because 8 divided by 2 is 4, and 3-13 can't be divided, but if you take 2d6+1, you get that spread. Simple.

Personally, any more I like to just note down the range in die notation rather than the range.

Doors
This is a section that didn't have a big effect on me, and my games play differently than expected because of it. There have been plenty of blog posts in the past by others about these rules or the similar rules in OD&D, BX, AD&D and your favorite retro clones of above systems. Some doors are locked, but most doors are not locked but stuck. Monsters can easily open doors, while players always need to bash open the doors (with a 5 or 6 on 1d6).

I've had stuck doors in dungeons, but they are rare, and early on were usually randomly placed. Now, I put stuck doors in for a purpose. And if it's stuck, it's stuck for everything. In my game PCs can just open most doors. There's something in my that rejects the idea that doors don't stick for monsters but do for PCs (although I like some of the justifications for the rule that have come up on other blogs).

Regarding secret doors, we get told that anyone can look, with a 1 in 6 chance of success (reference the section on elf special abilities in the previous post), taking 1 Turn per 10' square area searched. And that secret doors cannot be opened unless found! 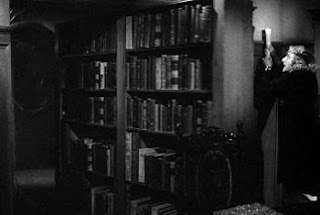 But come on, movies and Saturday morning cartoons have taught me that you can stumble upon them! So, these days I tend to note a secret door, and always the trigger, and let the PCs accidentally open the door if they mess around with the trigger. It's more fun that way.

Finally, we get a note about special doors that are one-way only, and can only be opened from the "wrong" side with a Knock spell.

Equipment Not Listed
The novice DM is strongly warned NOT to allow characters to buy anything not on the equipment lists. Why this section is worded so strongly, I'm not sure. But I heeded the warning as an 11 year old, not allowing anything to be purchased that wasn't on these lists until I got the Expert Set a year later.

I realize a novice DM might not grasp all the potential consequences of certain things being added to the list of stuff PCs can buy, but most of the time I can't really see problems with normal everyday sort of stuff (like a lot of the lists in the AD&D PHB).

Evasion and Pursuit
This is a fairly lengthy section, with a sort of "mini game" for how to resolve chases and escapes in the game. I've always liked these rules, although they rarely see play. If the monsters flee, I've found players usually just let them go. And players rarely decide to run away (sometimes to their detriment).

The standard reaction roll is used to determine if monsters pursue or not, with modifiers based on how damaged they are, and their intentions. If a monster has been slain, they get a -2 to the roll. If the PCs failed to land any hits, the modifier is +2, and if the monsters are after the party for some reason, the modifier is +3. A 9 or better means pursuit. Every 5 rounds, make the check again to see if the monsters continue the chase.

Where it gets interesting is the rules for dissuading pursuit. PCs can drop food or treasure (depending on the type of monster) and there's a 50% chance the monsters will stop and take the offering (1-3 on 1d6).

I also like the fact that it's explicitly stated that during pursuit or evasion, no mapping is possible and it's very easy to get lost. In small dungeons, that's not likely to happen, but in a larger lair dungeon, or a megadungeon, it's an important factor to consider for the players.

I also like the rules for Length of Pursuit (mentioned a bit above). The general guideline is that monsters won't pursue for very long, only 1 to 2 hours! That's sort of a long time, actually. But of course, that's really the time the monsters will search for the PCs after they get away. And it's also stated that they could continue searching for up to a day, maybe longer, if the PCs have taken something valuable from the monsters.

Again, I've only rarely gotten to use these rules, but the potential for fun gaming is there. Monsters tracking a party that fled from them, and popping up again and again in the dungeon (or the wilderness, although there are slightly different rules for that in the Expert Set) could be a lot of fun, in the right type of environment.

Higher Level Spells
This section provides three second level Cleric spells and three third level Magic User spells for use with NPC high level casters (or monsters, like dragons, although this isn't stated in this section). They may also be found on scrolls.

We get the Cleric spells Bless, Hold Person, and Silence 15' Radius, and the MU spells Dispel Magic, Fire Ball, and Fly. We also get charts for 4th and 5th level Clerics and 4th through 6th level MUs/Elves spells per day.

I'd need to check to see if the descriptions are exactly the same in the Expert Set or not, and years of playing multiple editions means I don't always get all the details of certain spells right, but there are one or two interesting things to note.

For Silence 15' Radius, it's stated that the spell prevents anyone inside the area from making noise, but does not prevent sounds made outside the area from being heard. This makes it a good tactical spell for a party, as it can be used to shut down enemy spell-casters (the typical use) OR to make the party more stealthy. It lasts 9 Turns in this book (that may be different in Expert), which is pretty long.

The Fly spell also has an interesting note. The spell has a randomized duration, 1d6 Turns, plus 1 Turn per level of the caster. The Expert Set may be the same as this, but maybe it's the RC version or the AD&D (or 3E?) version that is a little different. Here in the Basic Set, it states that only the DM knows the duration, the player only knows the possible minimum and maximum duration. It's implied that you could get in trouble being up in the air when the spell ends, although it doesn't state it explicitly. I'm pretty sure some other edition(s) state that you just slowly drop to the ground when the duration ends. Personally, I like this version better, as it gives the players a bit of a "press your luck" choice when using the spell.

Other than these two spells, though, there's not much of interest in this section.

Posted by Dennis Laffey at 4:16 PM