This section is just one page, and it doesn't offer a whole lot of insight into the game itself, but it does give a beginning DM a lot of solid advice to help them run a better game. 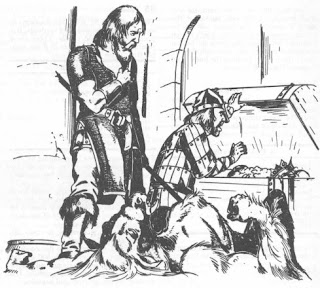 First off, this picture was really catchy for me when I first read the book. The dead minotaur, the look of wonder on the well-shaven Dwarf's face, the possibilities of what sorts of treasure waited in that chest... It's in the DM's book but it made me want to be a player! And I also wondered about that armor the Dwarf is wearing. The fighter's chainmail is obvious. As an 11 year old with only the vaguest knowledge of medieval armor (there was a cool, illustrated book on the Middle Ages in my elementary school library but that was about it for me at the time), I wondered if that was supposed to be what plate mail looked like? I thought plate mail was like the typical "suit of armor" and had no idea what that suit of brigandine was supposed to be. Well, I know now, of course.

Back to the text. First off, and this one is still important, is setting a finish time and stick to it. Some of my online games recently have gone beyond their normal ending time, and since we're all adults, we can make that decision to keep playing or not (but usually there's Hell to pay with my wife if I'm up to late). As kids, it didn't seem to matter. We'd usually play on weekends or a lot over summer or winter vacation, so with nothing much else to do, we could play until we got bored and decided to go play outside, or watch a movie, or play with action figures or video games, or whatever. And yeah, sometimes we'd have some marathon all night sessions. It was in my 20's and 30's that the idea of setting a firm stopping point and sticking to it really set it, since we had work responsibilities, some people had family responsibilities, and when I was playing with my old Ebisu Group, travel time back home to contend with. Online gaming takes away some of that worry, but it's still a good thing to keep in mind to have a time set to finish the game.

Next, the DM should announce all the treasure found, and let the players sort it out, including, we're told a bit later in the section, to let them figure their own XP awards. I don't think I've ever (or only rarely) done this "properly" and I find that dividing treasure XP evenly for the group works much better at building team spirit. Most players I've encountered also seem to feel that gems and jewelry should be sold ASAP so that the value can be distributed evenly. There's a part of me that wants to play in a game where the players are jockeying for position with loot shares, trying to get that extra GP/XP from each adventure. With the right group of players, it could be fun.

While the players are busy dividing the loot, the DM should calculate the monster XP. There's a detailed set of instructions. I won't go into it, assuming you've passed middle school math class and know this already. It does say explicitly that captured or incapacitated monsters are worth full XP, even if they're later released, while monsters that flee are worth 0.

The section on gaining levels has the famous admonishment not to allow more than one level gained per adventure. Of course, just what exactly is an adventure? Is it the session, even if it's ended in the middle of the dungeon to be picked up later? Is it the delve? (One trip in and then back to town for whatever reason, multiple delves may happen in one session.) Is it the module? It's a bit fuzzy. Also, if you give out too much treasure, and Gnorts the Fighter has 3,999 XP, you know his player is going to want to head back to town and call it a day after the first significant encounter... These days, especially with gaming time being limited, I'm more likely to just say screw it. If you manage to get deep in the dungeon and find some awesome treasure and make it out alive and earn enough to go from 2nd level to 4th, congratulations!

Finally, we're given a truncated version of the Monster XP table, only going up to 8 hit dice. It's handy to have the reference here right next to the sample adventure, so you can do the calculations by just looking through the pages you were just looking at, instead of having to go all the way to the back of the book and leafing through the monster section.

Posted by Dennis Laffey at 4:02 PM