We've already been introduced to Aleena the Cleric in the tutorial, but here we get the actual class description (for the first three levels, anyway). 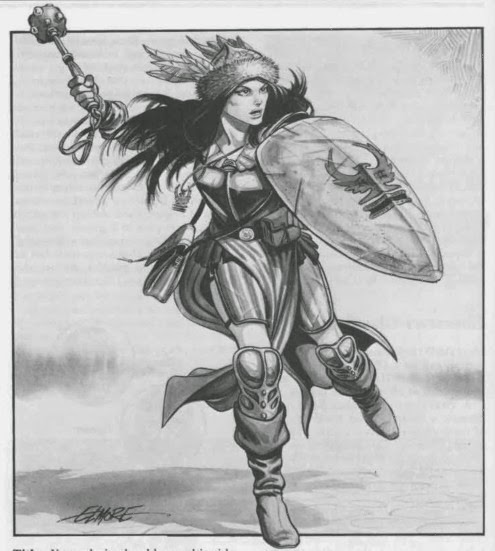 Right off the bat, we can see the effects of the 80's "Satanic Panic."  2nd Paragraph explicitly tells us that while Clerics serve great causes and their beliefs, the game DOES NOT deal with these things.  PC religion is just assumed, like eating, sleeping, and farting.  No need to bring it up in the game.  Later, the spell-casting description is also explicit in mentioning that players don't need to speak any mumbo-jumbo, just tell the DM that you're casting a spell.

Now, my dad is and always has been strongly religious, but he never had a problem with me playing D&D.  I guess the concern was bigger for the Protestants than the Catholics.  If these notes had not been here, if I'd had an earlier Basic Set or the AD&D PHB, which are explicit about Clerics serving made up gods, he might not have had the same reaction.

The first page (of four) also gives us our first glimpse of the standard setup for explaining the character classes.  The advancement table, level titles, Prime Requisite, hit dice, allowed weapons and armor, and special abilities.  Saving Throw tables are also right there, and I always later found it annoying that in AD&D you needed to look in the DMG to find them.  I much prefer having them there for players to just roll it and announce if they made it or not.  I've rarely had problems with players cheating with that.

Oh, and if I haven't mentioned it before (or at least recently), yes, I'm a fan of level titles.  They just add that bit of flavor that makes them fun, even if they make no real logical sense. 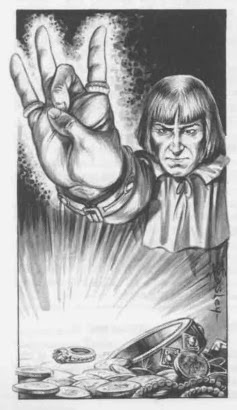 The following pages gives us Cleric special abilities and the first level spells.  Turn Undead is explained in detail.  One oddity I noted is that it says that when undead are Turned, they will return shortly, but it doesn't say how long it actually lasts.  Maybe it's in the DM's book.

We also get our first explanation of how spells work in D&D games.  The assumption is that "adventures" only last one day (see, they had the "15-minute work day" back then, too!), so the number of spells shown - once you reach 2nd level or higher - is the number of spells per adventure.  There is a note that sometimes adventures take more than one day, and can be changed out at will each morning after rest.

There's also an interesting note about reversible spells.  Because the reverse descriptions are detailed in the Expert book, it says that Clerics can't use reversed spells until at least 4th level.  Now, I don't have many players casting Cause Light Wounds ever, but sometimes Cause Fear does get used.  I may think about actually using this rule in my home games.  It would be interesting to try, anyway.

Some people in the OSR have experimented with alternate interpretations of rules.  Several bloggers I know have tried the "limit spell-casters to only one of any prepared spell."  However, here in Mentzer Basic, we get an explicit mention that casters can double up on the same spell, in the part where it describes how spells are forgotten when cast.  If you memorize the same spell twice, cast it once and one copy disappears but the other remains.  Despite it being "cannon" for me, I would like to try that variant.  Maybe allow duplicates at Name Level.  That way, the Clerics and Magic Users would get some "powers" as they level.  4th level lets you reverse spells.  9th lets you memorize duplicates.  Could be a fun way to run a game! 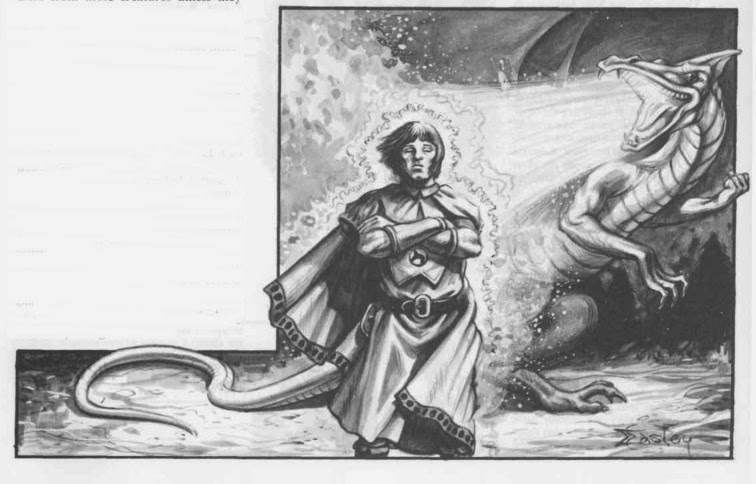 Notes on Cleric 1st level Spells:
Cure Light Wounds - heal 1d6+1 hit points or remove paralysis, take your pick.
Detect Evil - detects intent to harm the Cleric, not Chaotic alignment, nor evil intentions toward others besides the Cleric.
Detect Magic - as worded, seems like it detects invisibility, but the invisibility spell description may trump this.  I'll check it later.
Light - using it to cast on creatures' eyes to blind them is part of the description.
Protection from Evil - AC/save bonus, plus enchanted creatures can't touch the Cleric, but doesn't prevent ranged attacks or spells.  Lycanthropes are listed as not enchanted creatures, but I have usually considered them to be so.  Charmed or magically summoned creatures (like a vampire's swarm of bats) are considered enchanted.  also, something I've been doing wrong (and allowed Dean and Alexei to have an easy time in the last Chanbara playtest).  If the Cleric attacks ANYTHING while the spell is in effect, enchanted creatures can now touch the Cleric.  Still, one of the best spells to have when dealing with level draining undead!
Purify Food and Water - can be used to clear muddy/murky pools of water, an application that could be useful during adventures besides just keeping the rations from spoiling.
Remove Fear - I usually forget that when a frightened creature gets a new saving throw against the effect, there's a bonus equal to the Cleric's level (max. +6) to the roll.  Not that it comes up often...
Resist Cold - not sure why Resist Fire is caster-only, but I've always liked the fact that this spell affects the whole party (as long as they stay near the Cleric).