Had a rare Sunday game of Justin's Vaults of Ur campaign last night.  This week, our lineup consisted of Ripper the Orc (Jeremy/Oxide), Elder Karl the Cleric (Dean/Tallifer), Mork the Magic-User (Josh/Anonymous) and of course Thidrek the Sleestak Crossbowmaster (yeah, 3rd level baby!  I'll likely be dead soon.)  The stone fist we found last session was tried on by Elder Karl, who found that it gave him excessive strength in his arms (but not the rest of his body), and he couldn't take it off.  The statue's large mace seemed to enhance the power, though.  We're still not exactly sure what it does.

Thidrek bought a cart and of course instead of mules, Ur has six-legged triceratopsian beasts to pull them.  A pair of teamsters also were included in the package.  Blasko, our NPC Beastman crossbowman, came with us as well.  Our mission was three-fold.  First, get the iron statue we defeated last time up and out, and sold.  Second, get the alchemist's tower fixed up to be our new base.  Third, try and get the Hive lined up on our side to fight the Spiked Circle bandits/cult.

We got to the Hive without incident, and found a new faction apparently in control.  Mork's ESP came in handy as Thidrek snorted bug powder to talk to them.  The political strife is rampant, and "outsiders" are interfering.  We're obviously one interfering group, but apparently there's another.  Thidrek suspects Oogliata's Amazonian Legion (orcs). 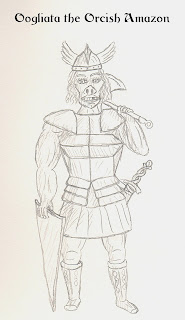 Anyway, we headed down and found no signs of new monsters, and our statue where we left it.  There's still more to explore down there, but we may save it for later.  We hauled the statue up, and it took most of the day.  We camped just outside the Hive, and Ripper saw a strange light show up in their tower during his watch.  Early the next morning, Zizik (the leader of the friendly faction) showed up with some of his men and a dried "brain beetle" husk that he said would help with communication between the Hive and Fort Low.  We're to present it to the authorities, he says.  Again, Mork's ESP showed us that Zizik had no malicious intent.  So we headed out with four Hive Tribesmen as honor guards to the beetle husk.

We got to a square and as we crossed it, two buildings on the opposite side collapsed, blocking our path.  And just then, three ape-like monsters with tentacles for arms attacked.  A Sleep spell, a set spear against a charge, a few crossbow bolts and flail swings, and another Sleep spell ended the encounter with no damage to us.  Mork was out of memorized spells, but had a scroll of magic missile and some flasks of acid. 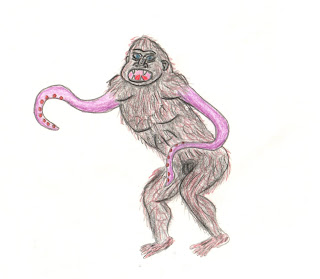 Obviously, the Spiked Circle wanted us to head south (north was the Zoo, Thidrek's in no hurry to return there), and it would take maybe the entire day to clear rubble.  Thidrek suggested scouting a path through alleys and ruined buildings, and while he did so, he found a path with minimal obstruction and a two story building with movement in the windows.  It was decided that Thidrek and Ripper should sneak to the building and ambush the ambushers while the rest of the group went through the alleys.

There were two beastmen archers waiting, and they had spread oil out along the street to the south.  We managed to take them, but not before one blew a warning on his horn.  No reinforcements arrived, luckily.  Thidrek found two wicker baskets, and opening one, let loose some flying leeches with bat-like wings.  Luckily, his sword went snicker-snack before they could snack upon Sleestak.  He then called for Ripper to light a torch and burn the oil, and tossed the baskets into the blaze.

By this time, Father Karl, Mork and the wagon team had cleared the alleys (Father Karl using his new magical stone guantlet to bash through a wall Luke Cage style).  Father Karl expected us to meet them at the far side, and not seeing us, went south to find what happened.  Mork decided to get the wagon moving rather than wait.  He ran into another ambush, this time led by several Spiked Circle spellcasters.  Blasko went down to arrow fire, and the Hive warriors and triceratops were put down by sleep spells.  Mork took some damage while waking up the Hive warriors, and the teamsters also were killed before the rest of us could arrive.  Luckily, the Hive warriors were fanatical about defending their Brain Beetle, and we were able to put down all of the attackers but one archer, who fled.  There were two demon-faced magic-users, and two helmeted guys, one a human (Cleric we think) and another an Orc Magi (Justin's palette swapped Elf class).

With no other encounters (and it pushing 1am), we made it back to Fort Low without further incident.

So we didn't even get close to objectives two and three, but we had a ton of fun with objective one, and next session I think we're up for a bit of political wrangling within the Hive.

Justin also let us know that the night's events had been inspired by him seeing the trailer for The Road Warrior during the week.  And it did make for a fun night, I have to say.

In other news, some of the Busan Gamers may be trying out the 5E Playtest soon.  I'll keep you all posted.

Posted by Dennis Laffey at 9:35 PM