This afternoon I ran my Star Wars game.

In this session, the party escorted Marjon, a Hutt princess, to Coruscant to attend the Grand Ball with a bunch of other rich young sentients. The party's mission was to protect the wealthy princess, make sure she had a good time, and help her improve her social cred. 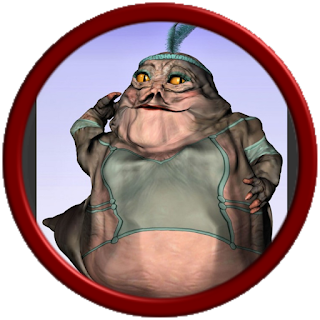 The players came up with a lot of clever ideas to accomplish the second and third goals, although there was a bit of confusion between the meaning of "have a good time" at first. Since my sons play in the game, we need to keep things PG rated but one player seemed intent on trying to get the Hutt princess laid...NOT the goal! It was one of those high society events where being seen is important. Luckily, the players thought to contact some local holonet influencers and have them talk up Marjon the Hutt. And in the party, when social barbs were flying, they were quick to try and defuse them through their own social interaction skills and occasionally a Jedi Mind Trick.

Star Wars d6 made social "combat" really easy. Instead of hit points, you get Stunned, Wounded, Wounded Twice, Incapacitated, and Killed in regular combat. So for social combat, I just used the same mechanics and modified the damage track to Insulted, Hurt, Hurt Twice, Humiliated, and Reputation Ruined.

Just like in normal combat, roll a skill to attack (Culture, Persuasion, Con, etc.) and another character can try to dodge with their own social skills. If the "attack" hits, roll Willpower to resist the "damage." I decided that the attack roll and damage roll would be the same, just to make things easier.

And it worked really well.

Luckily for the party, they managed to keep Marjon's spirits up. There was a Wookiee debutante that they also latched onto, and they helped keep her reputation up as well. The Twilek socialite, Chadra Fan celebrity, and Kel Dor Heiress were kept at bay. They even got the Togruta playboy to dance with Marjon, shortly before Zygerrian slavers broke in to try and kidnap a high value target for ransom.

Of course, the PCs fought off the Zygerrians. And they did it without any grenades!

It was a pretty fun adventure, and in retrospect, it probably didn't need the Zygerrian interruption. The social interactions were fun and challenging all on their own. Hat tip to Jason Alexander for ideas on running a social event as an adventure. I didn't use all of his method, but it sure helped me sort things out and run the game.